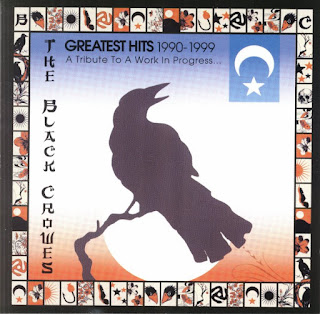 At the end of the decade, the Black Crowes parted ways with American/Columbia, which made sense for both parties. The band didn't sell records like they used to, and they preferred to be independent anyway. It wasn't an entirely amicable parting -- the label wouldn't let the band record old songs for an independently released live album -- but as the last album in the contract, the compilation Greatest Hits 1990-1999: A Tribute to a Work in Progress, is a nice addition to the catalog anyway. Basically, the album has every song a casual fan would want ("Jealous Again," "Twice As Hard," "Hard to Handle," "She Talks to Angels," "Remedy," "Sting Me," "Wiser Time," "A Conspiracy," "Kickin' My Heart Around") and is a nice listen for the hardcore. There are several great songs missing and there's perhaps a little bit too much of By Your Side here, but the only glaring omission is "Sometimes Salvation"; so, in other words, it's pretty close to a perfect compilation of that first decade. Gathered like this, the Black Crowes' finest songs are all the more impressive. The band not only sounds tight, but they sound diverse, able to handle full-throttle barroom ravers as easily as folk ballads, soulful vamps, blues, and laid-back Southern rock. Even more impressive, it's easy to see what good songwriters the brothers Robinson are. Yes, they're classicists, cribbing from the Stones and Allman Brothers and everything in between, but they know how to put it all together, write good hooks, and deliver them expertly. Greatest Hits is proof of that, and it's some of the best pure hard rock since the golden age of album rock.