Paul Filipowicz - Go For The Throat 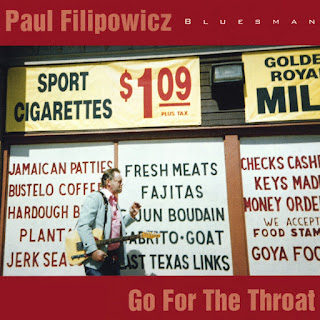 PAUL FILIPOWICZ is one of the last blues guitar players that literally was brought up on Howlin Wolf, Muddy Waters, Willie Dixon and Hound-Dog Taylor.
With strong Chicago roots you can hear Magic Sam, Otis Rush, Sammy Lawhorn, Buddy Guy, Jimmy Dawkins and Luther Allison in his playing. PAUL FILIPOWICZ 30 years of one nighters, touring, parties, clubs fairs, festivals, radio, TV appearances, excursion boats and just about any other venue namable. He has molded his playing into a distinct original immediately identifiable sound. 'This guy ain't no copy cat.' FILIPOWICZs song writing has matured over his period and with the help of the Dallas based 'GILA MONSTER' label has been able to showcase his talent by recording two CDS in the past year.
SINGER, SONGWRITER, GUTAIR and HARP. Born Chicago 3-24-50. Raised in the Lockport, III. corn fields in the 1950's. My sisters played piano in church and of course we all sang. About the only other music we could get was the radio.
One night while cruising the dial Filipowicz pulled in a radio station out of Tulsa. They played Wolf, Sonny Boy (II) and Muddy back to back. That was his first exposure to blues. He first witnessed live blues in 64 or 65. "While waiting out side a club on Chicago's South Side (it was boiling hot about 2 p.m. and all these people were going into this air conditioned club) Otis Rush and his band were tearing it up right there in broad daylight. Electric guitar was it".
Learning by ear was about the only way to go about a blues education in those days. "I had been playing without a pick and the first time I heard Sam (Magic Sam) it clicked. The phrasing was what I was hearing." Over the 30 plus years of fronting his own band he has played venues from the midwest to Denver, to stints in Texas and Miss, and opened for everybody from the "Thunderbirds" to "Edger Winter". But his fondest memories are of the shows with "Hound Dog TayJor" and "Mighty Joe Young" in the 70's. After a version of Sams's "All Your Love" Joe told him "that was nice, keep it up" and Mr. Taylor would even grunt when he'd see him. "I know you're a blues man and you know you're a blues man and every time you take the stage you've got to prove if' Luther Allison once told Paul.
With 4 CD's under his belt since 1996, 3 for the Dallas Texas Gila Monster label (#14 in 1998 and #7 in 1999, Texas Blues new releases, Real Blues mag.) and positive reviews in such publications as, "Living Blues", "Blues Access", "Blues Revue", "Big-City Blues", "Soul Bag", and many more Filipowicz remains true to the music he loves, Blues.
CHICAGO born PAUL FILIPOWICZ is probably the only Wiscinson-based Blues Guitar player that will ever make the Top 15 Texas Blues New Release Albums 2 years in a row. Real Blues mag., Victoria, Canada.