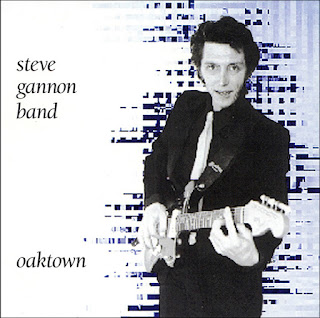 American blues 'n' roots music by a British guitar-player living in Oakland, California.
Here's an interesting release from an Oakland veteran who is originally from London, England, Steve Gannon came to Oakland in 1982 and quickly immersed himself in the blues, hanging out and playing on stage at the legendary Eli's Mile High club run by the late Troyce Key a Southerner who'd played the blues all his life mainly in partnership with J.J. Malone. One of the Eli's regulars, Sonny Rhodes, hired Steve to go on the road with him and he's also played every major California Blues Festival in the last fifteen years backing the cream of the West Coast vocalists. Recently Steve has been the host of the Monday Night Blues Jam at Larry Blake's club in Berkeley and this CD features his Blue Monday band with some special guests, Ms. Dee, Big Bones, Minor Williams (no listing of who plays/sings on which songs so I'll have to guess) and Christian Rannenberg. Ms. Dee does a fine job on 'Trouble, trouble' and Williams really shines on 'Too through with you' (I'm assuming it's Minor Williams, whoever it is, is damn fine and deserves to be heard by a larger audience). That's the only complaint I have with this CD - the lack of accurate information such as lineup on tracks and the actual history of this collection of tracks (I see the term re-release on the insert so I'm assuming this came out once before, plus the copyright date is from 1992). But, aside from that I have no complaints. The music is fine West Coast blues and Steve Gannon is a very tasteful guitarist - a cross between Steve Cropper and Jimmie Vaughan - tight, funky and modern but with a clean sound and a very disciplined style. He's also a pretty good vocalist as well with a natural and pleasant delivery and that's a big accomplishment for any blues singer. His backup unit of Kelvin Dixon, Chris Burns and Willie Riser is just as proficient as he is, and drummer Kelvin Dixon (I'm guessing) is one of the best there is and the bass playing is superb too. Listening to the often - recorded classic 'Wee Wee Hours', the Chuck Berry tune that turned so many onto blues, one gets a good clear picture as to the prowess possessed by the Steve Gannon Band. Of ten tracks four are originals and the six covers get special treatment that instill new life into them. Anyone who has more than a passing interest in West Coast blues will find much to like with this disc as once again the under-appreciated and under exploited (I use 'exploited' in a positive sense) Oakland scene drops a very ripe and tasty treat into our laps. If anyone ever sets up shop in Oakland/Los Angeles with the sole intention of recording the wealth of talent there, they will 'hit the jackpot'. And this CD is ample proof. 4 bottles for a CD that is full value for your bucks."