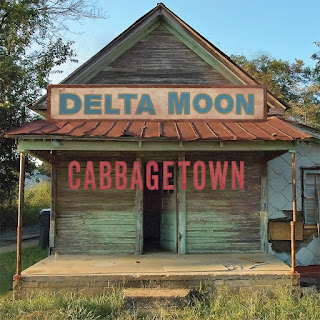 "Cabbagetown" from veteran blues/rockers Delta Moon is led by the group's two founders, singer/guitarist Tom Gray, the Roots Music Association's 2008 Blues Songwriter of the Year, and slide guitar master Mark Johnson.
It features nine original tunes plus blistering cover of Sun House's "Death Letter." Net Rhythms (UK) has called Delta Moon's signature sound, "Music as it should be ? raw and honest." We call it a voice, a groove and two slide guitars. After winning the International Blues Challenge in Memphis in 2003, the band widened its travels to include the US, Canada, and Europe. In 2007 bassist Franher Joseph joined Delta Moon and was followed in 2015 by drummer Vic Staff (Blueground Undergrass, Donna the Buffalo, Toubab Krewe) to complete the current line-up. The band's constant recording and touring continues into 2017with tours scheduled for the United States, Germany, England, France, Italy, and more. Gray is also a past Georgia Songwriter of the Year, with tunes recorded by Cyndi Lauper (including the hit "Money Changes Everything"), Manfred Mann, Carlene Carter, Bonnie Bramlett and many others.