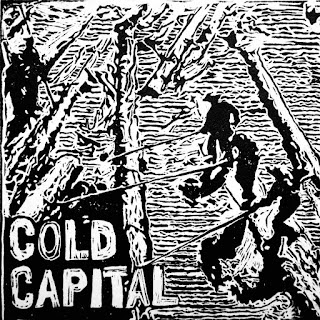 When you spend multiple days on end listening to a great band for a review, I must tell you: it’s hard not to get personally invested and attached to the music. This is especially true when it’s as layered and listenable as Cold Capital’s newly released debut LP “Frozen Assets”, and even more so when the entire album is filled with endless earworms. Cold Capital categorize themselves as “blues rock with a roots rock feel”, and while I completely agree with that assessment, that short description fails to convey how truly catchy and cohesive their music really is. They demonstrate a great balance between their faster numbers and mellower tracks, all while managing to make even their slower tunes super catchy – no easy feat. Clearly well thought out, with a change in tempo from one song to the next, the album always keeps you guessing and yet fully entranced throughout its nine tracks. Their way of making an entire album with multiple genres, while still keeping a familiar and identifiable sound to their music, is truly masterful. Writing lyrics from personal experiences and sharing their story only adds to the charm and depth of their songs: “I wrote Northern Girl after a dangerous canoe trip on the Coulonge River where the rapids feed into the Ottawa River. “Ride the river till you’re upside-down” is quite literal.” says lead singer Erik Hertzberg.
Allowing us further insight into themselves and their music, Erik Hertzberg shares about the first track on the album: “Alright Now is a song for a friend who crashed his favourite car on the way to come visit Ottawa during a late winter snowstorm.
Cold Capital will be doing an upcoming mini tour to support their new release, heading the way of Kingston, Toronto and Peterborough, so spread the word to friends in those cities and let them in on the good times. Mark your calendars now: they’ll be playing a show at Irene’s on June 10th. We’ll see you there!