Johnson Luther - lonesome in my Bedroom 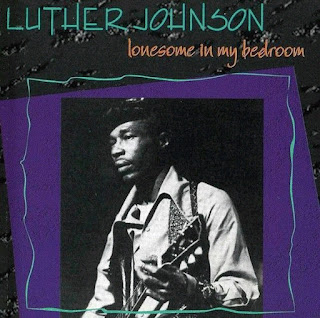 Luther Johnson is one more of the great blues artists who recorded albums in Europe in the 1970s. This album, made in France in 1975, one year before his death, is a very good example of “guitar blues”.
Side A of the vinyl presents a kind of slow blues, similar to the work of masters as Magic Sam, Buddy Guy, Jimmy Dawkins and Otis Rush (these two last mentioned also released albums on same label that issued Lonesome in My Bedroom). This side of the record brings two classics written by Muddy Waters, whose backing band counted with Johnson for years, and they are some of his best here.
The other side is more rocking (a typical "blues rock"), including an interesting version of Chuck Berry’s “little Queenie”, and two songs by Johnson himself that prove he’s a great composer too.
It’s really sad to think about the fact of good albums by Americans like this only exist because passionate Europeans dedicated to release it. The same happened (and still happens) with talented Brazilian artists: some of them just got issue their best albums abroad, in Europe or, principally, in the United States (“a prophet is not without honor, save in his own country”; or in a good Portuguese, “santo de casa nao faz milagre!”)

Lonesome in my Bedroom