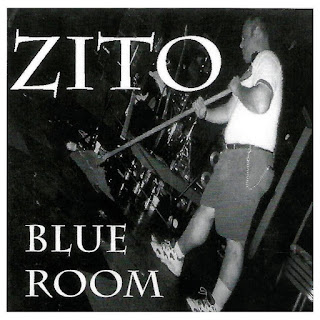 It’s back. The debut album that blew up the ’90s blues scene. The songs that announced the touchdown of a major new talent. In modern times, as an established solo star and former member of the globally acclaimed Royal Southern Brotherhood, Mike Zito’s reputation precedes him. But turn back the clocks. Rewind the film reels. Slip through the wormhole to 1998, when a 27-year-old punk kid took his first shot in the studio. “Blue Room,” he reflects, “is the beginning of me becoming an artist.”
By 1998, Zito had been around the block. Raised at the sharp end in St. Louis, Missouri, he’d witnessed the lean years of the ’70s, as his father – a union employee at the local Anheuser-Busch brewery – grafted to support five kids in a cramped apartment. Music was a way out, with Zito learning his craft at a downtown guitar store, then seizing any live work that fell his way. As he told the Blues Mag: “I’ve played with country bands, dance bands, rock bands, alternative bands…”
Blue Room was the moment of clarity, when Zito realised he was burning to be more than a roadhouse-filling covers band. In 1997, he assembled a dedicated lineup and announced his new mission statement: original songs written from the heart. But artistic integrity didn’t come cheap. With just $1000 for studio bills, Zito knew he had one shot. “I have many great memories of the Blue Room sessions,” he says. “It was recorded in the basement of a house outside of St. Louis. We recorded the whole album in one day and all the tracks are live with no overdubs – except the vocals. We had played the night before until 6am at an all-night club in St. Louis and went to the studio at 9am. We brought beer with us and basically did not sleep.”
Play Blue Room today and you can still feel the urgency flood through the speakers. The scratchy funk-blues of Hollywood sets a breakneck pace. Pull The Trigger has an irresistible stop-start lick that underpins Zito’s ragged vocal. It’s All Good pairs a muscular lick with a virtuoso solo. Gravy Jam andSoundcheck are chop-flexing instrumentals, while Lovering is a slow-blues pulsing with potency.
Elsewhere, Shoes Blues is a rampant good-time anthem, offset by Ways About You’s jazzy shuffle and the glassy funk of Lightning Bug. Finally, there’s a wah-soaked cover of Elton John’s Rocket Man, closing a tracklisting that offers a signpost to the artist Zito would become. “The singing is sometimes not quite there,” he considers, “and the guitar playing is so over the top. But it’s full of honesty.”
Likewise, while Zito’s later albums would find him drilling deeper as a lyricist –to examine themes from mortality to sobriety – this opening gambit captures the worldview of a young man enjoying primal pleasures. “The vibe of Blue Room is total bravado,” he reflects. “I was so full of myself back then, and mostly the songs were about partying and sex. I was 27 years old and trying to be a rock star.”
Blue Room changed everything. As the album sold, the songs began to be requested live – displacing the Cream and Hendrix covers – and Zito was heralded as an artist of rare potential. Back then, he didn’t anticipate the bitter-sweet future about to unfold – the lost years of alcoholism in the post-millennium, the salvation offered by his wife, Laura, the plaudits of Royal Southern Brotherhood in 2012 and the rising trajectory of his solo career since he picked it back up with 2015’s Keep Coming Back. But when Zito looks back now at Blue Room, he wouldn’t change a thing: “I find such joy in listening to the young man on this recording. I’m so proud that it’s finally being released by Ruf Records after twenty years…”