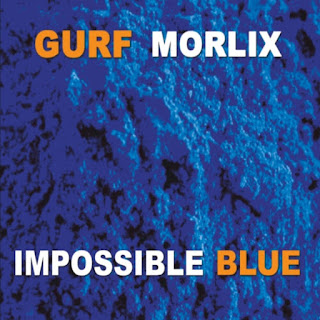 There’s a dark intimacy to Gurf  Morlix’s albums. They can be so spooky and real that you’d swear he’s in the same room with you. It’s inevitably a haunting experience. Yet, having survived a scary heart attack a few years ago, his take on mortality with this, his tenth solo recording, offers more slivers of light (there’s even a song with that name here). The blues can provide healing power which sustains him throughout. And, more than ever Morlix takes a deep dive into blues, his favorite idiom, on Impossible Blue. If, by some chance, you are unfamiliar with Morlix, you have most likely heard him as the producer for Lucinda Williams, the guiding light for Ray Wylie Hubbard and folks like Slaid Cleaves and Mary Gauthier. He’s a tremendous guitarist and multi-instrumentalist who graces many albums from roots artists. He was Blaze Foley’s musical partner for years. His modest approach to songwriting can be traced to his many years as a producer and sideman but put that misplaced modesty aside.  Morlix arrived as a songwriter several years ago. It’s only now that he’s finally acknowledged it. Joined as usual by his frequent collaborator, drummer Rick Richards and fellow Austinites, the acclaimed Red Young on B3 and Jaimee Harris with beautiful female harmonies, Morlix handles the vocals and rest of the instruments for these nine original songs.  Morlix considers these nine songs to be “the best songs I’ve ever written.” Morlix’s albums are as pristinely recorded as any you’ll hear because he is a perfectionist. He brings that same level of scrutiny to his songwriting  and you be assured that you’ll understand every single word. Better yet, he’s blessed it. That hasn’t always been the case. We’re going to start with the last song. Take “Backbeat of the Dispossessed,” a haunted bittersweet eulogy to a clearly departed friend, in this case his dear friend from his native Buffalo, drummer Michael Bannister. Morlix sings “I always knew I would see you again” – until he learned of Bannister’s unfortunate suicide. On previous albums he’s memorialized Foley in a similar way. Perhaps combined with his own near brush with death, these thoughts give him a greater strength. Speaking of the heart attack, he says, “I think the main thing I took away from all that is that I realize that every day is a bonus day. I’m living on bonus time now, and I’m just very aware of that, every day. Basically, I’m just in love with life more than ever now. Because here it is, and I might not have been here, but…here I am.”  These thoughts are put to lyrics in “My Heart Keeps Pounding” – “My head is throbbin’/My world keeps wobblin’/All the alarms are soundin’/Bu my heart keeps poundin’”. The optimism of “Sliver of Light,” about driving to his next gig, is quickly offset by his trademark darkness in “I’m a Ghost” and two songs later, a man mourning for a drowned lover at the “Bottom of the Musquatch River.” It’s all deep blues, none more so than the jealous heartbreak recounted in “I Saw You.” He even does as most bluesmen would do, fire up a lengthy guitar solo in “Spinnin’ Planet Blues,” one of only three songs where the iconic Red Young accompanies on B3, clearly pushing Morlix. Morlix is one adult dose. His brutal honesty and raw approach may not be universally appealing but he’s undeniably a force. This could well be his best album, but it won’t be his last. . As he sings in 2 Hearts Beatin’ in Time” – “There’s a bit more I want to do/I left unfinished a thing or two”  Since Morlix is making the most of “Bonus time” we can gladly look forward to more too.