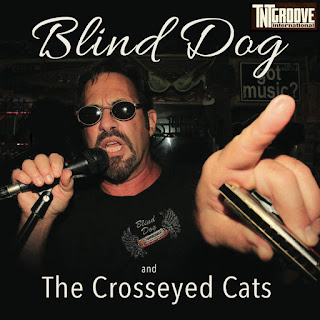 Jeff “The Blind Dog” Vincent is a singer songwriter, harmonica player and longtime Florida resident from Pittsburgh PA. Though his musical roots stem from childhood listening to his family of fine musicians. Blind Dog did not begin playing until the age of 33. Advancing rapidly in his skills as a musician and singer he became a regular featured artist in the Pittsburgh club scene, eventually forming his own band ‘Blind Dog” for a short time. He then was asked to join “Blue Razor” a favorite Pittsburgh area group.After moving to the Tampa Bay Area in 2001 he soon joined the Walker Smith Group as a sideman & featured singer. The following years were spent playing & recording with Walker and other Bay Area musicians with two trips to the International Blues Competition with the Walker Smith Group where they earned the title of Beale Street Blues Kings in 2007. After leaving the Walker Smith Group he concentrated more on song writing, occasionally featuring in local venues and blues festivals. Encouraged by his many musician friends he completed and recorded an album of original music and arrangements, Blind Dog and The Crosseyed Cats, released in 2019 featuring many of the Bay Area’s finest artists.