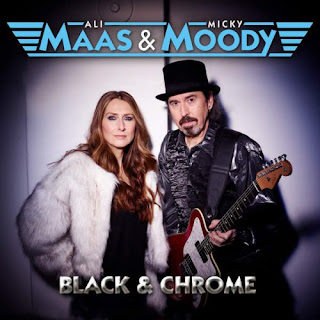 Micky Moody needs no introduction as he's one of the best guitarists around. Ali Maas is also one of the best female vocalists of swampy, lowdown blues you will hear. Micky is best known as a member of the original lineup of Whitesnake, although he actually began his career years earlier as a member of Juicy Lucy. After Juicy Lucy, Micky played with Snafu for a few years, as well as on several session gigs, before joining Whitesnake in 1978. When bandleader David Coverdale began tinkering with Whitesnake's lineup in the mid-'80s, Micky resumed his prior career as a session guitarist; he also formed a blues-rock outfit called the Moody & Marsden Band with Whitesnake cohort Bernie Marsden, andreleased an album titled Never Turn Our Back on the Blues in 1994.
Ali Maas started singing at 15 years old with homegrown rock bands in Horsham, before travelling to  the far east to sing with a theatre show, playing mainly with Jazz and blues bands. Ali's singing career in the form of the blues, and after her debut appearance at The Ealing Blues Festival, was described in Blues Matters as ' A Star In the Making'. The Maas and Moody Band are releasing an album of original tracks, called 'Black and Chrome', in September , so this will be an opportunity to hear their new matrial live for the first time.