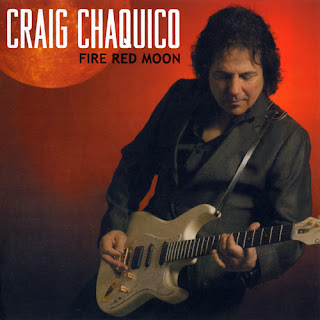 Fire Red Moon is neither the arena rock of Craig Chaquico’s days with Jefferson Starship, nor the chart-topping smooth jazz that he initially turned to as a solo artist. It’s something grittier, more primordial — and utterly surprising.
Yet, there he is, chugging and juking with vocalist Noah Hunt (Kenny Wayne Shepherd Band) through “Lie to Me,” the first of seven originals on Fire Red Moon, due on October 16, 2012, from Blind Pig Records. Chaquico also tears into tracks from the likes of Muddy Waters and Robert Johnson, and brilliantly reworks the Albert King classic “Born Under a Bad Sign” as a scalding instrumental.
There’s none of the brawny crunch associated with his mainstream Starship hits, and none of the satiny ruminations of Acoustic Planet — nominated for a new age Grammy in 1995. Chaquico, often alongside touring vocalist Rolf Hartley, instead settles into a dusty-booted groove on “Devil’s Daughter,” then goes to the bottom of a brown bottle with singer Eric E. Golbach on “Bad Woman.” “Little Red Shoes,” as with “Devil’s Daughter,” occasionally betrays just a hint of his pop-chart-topping penchant for a hook, while “Blue on Blue” almost gets quiet enough to recall his more recent smooth jazz past, but Fire Red Moon never strays too far from its central roots-rocking, occasionally Santana-esque theme.

[SOMETHING ELSE! INTERVIEW: Craig Chaquico talks about his blues-rocking release ‘Fire Red Moon,’ and his musical journey from Jefferson Starship into acoustic contemporary instrumentals.]

Meanwhile, instrumentals like the fire-kissed title track, the groove-laden “Fogtown Stroll,” and of course the Booker T. Jones/William Bell-penned “Bad Sign,” give the guitarist the chance to use muscles he hasn’t in ages. Finally, there’s “Crossroads,” which Chaquico — in a nod to his classic-rock beginnings — performs with the double-time virtuosity of Eric Clapton’s Cream. As with his take on Muddy’s “Rollin’ and Tumblin,” there’s little chance to do something definitive here, so ingrained are these musical memories. But give Chaquico credit for this: Here, as elsewhere on the captivating Fire Red Moon, he flings himself into both tunes with a furious abandon.
A central figure in Jefferson Starship from 1973-1990, Chaquico wrote or co-wrote hits like “Find Your Way Back,” “Laying It on the Line” and “Jane,” while adding signature guitar elements to “Miracles,” “Count on Me,” “We Built This City,” “Sara” and others. Many were surprised when he spent much of the next period downshifting into quieter instrumental efforts. In some ways, Chaquico’s new turn toward blues and rootsier music on Fire Red Moon — marking his debut for Blind Pig Records — is just as unexpected.
But Chaquico, who came of age in the polyglot-rock atmosphere of turn-of-the-1970s San Francisco, clearly has a deep affinity for this, as well. As he tears through the familiar mid-century triumphs included here, even while adding similarly constructed originals that both celebrate and amplify those earlier influences. Along the way, Chaquico stakes his claim in yet another musical genre — and, even though he just arrived, already sounds right at home.