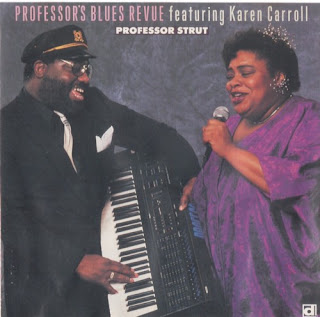 No other contemporary blues artist brings as much of the rousing sanctified spirit of the church to his overall musical approach as Professor Eddie Lusk. One of the Windy City's busiest blues session players for the last decade, the Professor mastered the keyboards while still in his teens at his father's South Side church, and that enduring spiritual base remains at the heart of the Professor's blues.
In addition to the Professor's hearty vocals, the band also showcases the gutsy pipes of Karen Carroll, a second generation blues woman whose mother, Jeanne Carroll, has graced the scene herself for many years. This outing represents Karen's recording Debut.
(c) Allmusic.com

Professor Eddie Lusk mastered the keyboards while still in his teens at his father's south side church. That enduring spiritual base remained at the heart of the Professor's blues until his tragic 1992 passing at the age of 43. While he played with numerous blues and soul greats (Junior Wells, Z.Z. Hill, Luther Allison, Koko Taylor, Syl Johnson, The Soul Stirrers), Professor Strut was his only American release under his own leadership.
(c) Amazon.com

Makes us see, even feel, the passion, joy and intensity of the blues. It is these uninhibited images that the unique vitality of the Chicago blues world shines through.
(c) Rolling Stone