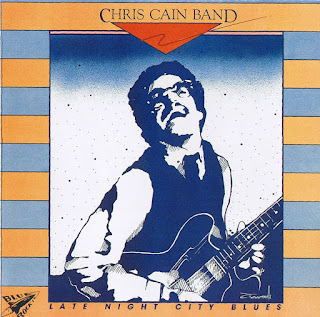 This was basically Chris Cain's first album. I believe he had made single cuts of songs on the album prior to its release. This album reflects the true, gutsy styling of a young blues man on the rise. The songs on this album, though rough around the edges regarding its studio work, was and probably will always be the some of the best work Chris Cain has ever produced. "Wake Up and Smell the Coffee" and "Late Night City Blues" are true blues masterpieces. These are the songs where Chris' guitar solos made even B.B. King stand up and notice. Chris went on tour with B.B. right after this album was cut.
The songs on this album were written during a time when Chris was "gigging" in San Jose and Monterey nightclubs. He was always a favorite attraction on Cannery Row, where on a Friday or Saturday night you would find packed houses and blues enthusiasts lined around the block to see him. When you went to see a Chris Cain show, you knew you'd be in for a good time, because it was a totally blissful blues environment. Chris was very personable and made everyone feel like they were part of the party. But, make no mistake. It was the whining of that beautiful sound coming out of Chris' guitar that they all focused on. It just had a way of cutting through you and stayed with you forever. This album is red hot.