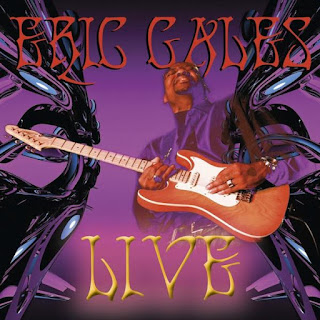 Not many can channel the blues as Eric Gales can.  Neil Young might just call him Mr. Soul.  His supreme talent has graced the stage for over 20 years, a time now to celebrate the best of a man seething with the blues, the only way to truly capture him in all his might; Live.  He could appease a crowd for days on his rip-roaring solos alone, as his guitar seems to speak to him and all who will listen, forging a bond ever so potent.
Live is filled to the brim with hard-nosed solos and suave, passionate vocals.  Tracks such as “The Change in Me” and “Make it There” remind one of a ZZ Top style in their quick, gritty riffs.  Eric does not conform to one style, however.  One can hear the influence of greats Eric Johnson and Stevie Ray Vaughan, among others.  Songs “The Liar” and “Retribution” take a darker look into some of the regrets and demons Eric has dealt with in his life, the heavier riffs indicative of his trials and tribulations.  “The Wings of Rock and Roll” is a beautiful ballad woven with heavier segments, as if to show the rise and fall of an emotional rollercoaster, guided to reason on the wings of rock and roll.  While “Me and My Guitar” (gently weep) is a great symbol of the union Eric has with his instrument.  It is a powerful force and gateway to his mode of expression, and consequently, the enjoyment of all who have discovered his music.
The album flows nicely, with a mentality of hope as well as reflection, feeding off his inner strength to fend off the demons of his past, looking forward to what lies ahead.  The emotion Eric pours into each lick and soulful lyric makes this all the more resonating for the listener.
Eric Gales walks in stride with blues legends that walked before him.  This guy can really jam. Hard. When he runs away with a song, he doesn’t come back down.  His licks are pure, downright dirty blues, cool enough to simmer the flames of Hendrix’ guitar, just to ignite them once more.  But words won’t do Eric justice, as the music speaks for itself.