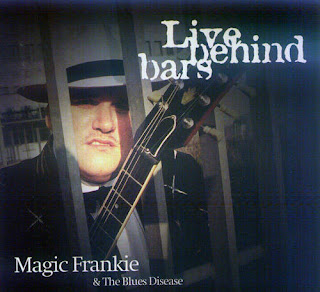 Magic Frankie is one of the most striking persons in the Dutch blues scene. He has made several blues albums in the past and he has developed a close relationship with B.B.King. Everytime when B.B. was playing in Holland, Magic Frankie was asked to open for him. During one of B.B.’s dutch shows Magic Frankie was invited on stage and they jammed together for almost half an hour!! Needless to say this was a big honour for the Dutchman, who always dressed himself in an outdated gangster outfit. Magic Frankie caught the attention of both press and audience, when he recorded the album 'Hearts In Sorrow' together with Kaz Lux, the singer of the legendary sixties band Brainbox. It was a semi-acoustic cd with laidback (country) blues.
His live album ‘Live Behind Bars’ was recorded before an audience of inmates during a tour of dutch prisons.