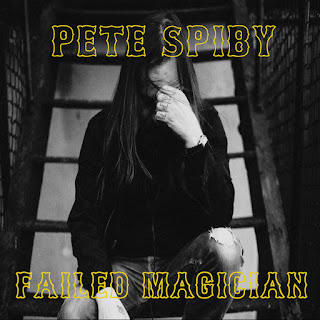 Spiby is probably most well known for being the leader of Black Spiders - renowned for the face melting rock n roll and unmatchable swagger. Groop Dogdrill were pure, uncut, weapons grade alt.rock napalm and Future eX Wife lovingly crushed anyone and anything in their path. In April 2017, Black Spiders gave their fans one final chance to raise their middle fingers aloft and yell ‘fuck you’ at their five, grizzled faces before hanging up their riding capes for good. In the months leading up to their final shows, Spiby was undergoing rehabilitation. Not in the cliched rock n’ roll sense, dear reader, but for an operation on his left hand, which learned physicians say is an important part of the human anatomy when you’re doling out sweet riffs left, right and centre. “When we did the farewell shows, it gave me such a confidence boost that I was even able to play guitar without the pain and medication that I’d had for the last 3 years,” says Spiby. “I decided that it was time to do the only thing I've been doing since I was at school.” Please welcome, ladies and gentlemen, Failed Magician. It's the title of Spiby’s new solo release; it's not a concept album about sleight of hand tricks gone awry, accidentally sawing an assistant in half or drowning before a horrified studio audience.  “Me and Ozzy [Lister, former Spider riffologist] were working somewhere in the world,” explains Spiby, “and during a very one-sided drunken conversation, he slurred the words “I just don’t want to end up being a failed magician. It’s obviously not what he meant to say, but I kept it under my hat to use at some point in the future”. There comes a time in a man’s life when the blues become mandatory listening and this in turn has informed his new songs. “I have sorrow in my pocket and exorcising the ghosts is a way out of the darkness,” he says.
“There were a lot of deaths in rock during 2017 that made me think about mortality, depression and life. There's a thread that goes through all of this and it’s basically a collection of domestic blues songs, sometimes seen from both sides of the story. “Sabbath and Zeppelin have a lot to answer for, as I guess do the Beatles and the Stones, for embedding that feeling and influence into their music,” he continues. “Everyone that has since been influenced by them, directly or indirectly.
Spiby called upon fans to fund his solo outing via Pledgemusic and smashed his goal to bits. “That’s when shit got real, as they say,” explains Spiby. “I had a bit of a panic on, getting the songs together and finished; things started to take more of a shape I liked and could sort of understand. It started out so simple and I made it really complicated for myself and recorded 30 odd songs, which is a fuck load of time and effort.” For his next trick, he assembled a crack team of ne’er do wells to help bring his ideas to life in the studio with Matt Ellis at the production console.
“It’s quite a mixed bunch of losers really,” he says. “All solid musicians and amazing people : Luke Athiko (The Defiled, guitar), Simon Bismark (Daken guitarist, bass) and James Maiden (Future ex Wife, guitar). Then there were three drummers : Simon Smith (Wedding Present/ChaCha Cohen), Tony Arthy (The Wonder Stuff) and Richie Mills (Cable/ Imogen Heap). Danni Maibaum (Double NoNo/ Dirty Blood) recorded some vocals. Adam Thistlewaite (Massive Wagons) and Lee Storrar (Servers) guitars. And his kids too. “If it’s the last thing I ever get to do, recording wise, I’ll die a very happy man,” says Spiby of his solo debut. “The greatest success is just even getting it done in the first place. There will be live shows later this year - “It’ll be a chance exorcise those demons in the live arena,” says Spiby. “The songs have already started to take on a different meaning already and band rehearsals are going very well. World submission awaits.”