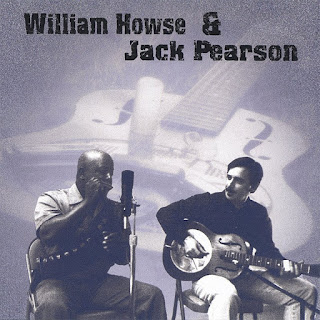 Authentic acoustic blues originals: wailin' harmonica with grit and soul and hambone slide on resonator guitar.
"William Howse & Jack Pearson" is a 1999 Candlefly release showcasing the very special talents of two extraordinary musicians who have been playing together for more than 20 years.
Jack Pearson paired up with longtime friend, William Howse, to create this authentic acoustic blues collection. William is featured on the CD on harmonica and vocals. Jack provides vocals on two songs on the disc, but for the most part plays fingerstyle guitar with lots of slide in open and standard tunings.
William's harmonica playing is in the tradition of John Lee Williamson, Big Walter and Deford Bailey. And his singing is reminiscent of Muddy Waters. William is one of the few true bluesmen around today. He's played with such artists as Lonnie Mack and Tinsley Ellis. He gave a special performance at the dedication ceremony of the Tennessee Historical Marker commemorating harmonica player Deford Bailey, the first black musician to appear at the Grand Ole Opry. And William's playing was featured on the soundtrack for the TNN production of "The Life and Times of Willie Nelson."
Jack is probably best known for his blues/rock lead and slide guitar playing with The Allman Brothers Band from 1997 to 1999. But on this CD, he plays acoustic and resonator guitars. He fills the disc with solid, swinging rhythm and blistering slide using a hambone.
Through the years, the acoustic duo has shared the bill of festivals and theatres with performers such as The Fairfield Four, Johnny Shines, Yank Rachell, The Nashville Bluegrass Band and Willie Eason. They've also played for young children and teens at many schools in the South. A memorable performance for them took place at the dedication ceremony of the Tennessee Historical Marker commemorating blues harmonica legend, John Lee "Sonny Boy" Williamson.
Jack has two other CD's available on CD Baby...his first solo album, "Step Out!" on which William both played and co-wrote several songs...and the self-titled instrumental CD, "Jack Pearson" where again you will find William's playing along with a slew of other special guest musicians.
A sampling of reviews of "William Howse & Jack Pearson"...
"Two old friends, two bluesmen extraordinaire, two kindred spirits, two brothers. William Howse and Jack Pearson combine their love of the blues and their natural affinity and connection to each other to give us an outstanding look into acoustic blues songs and stylings. Twenty years or more of playing the blues together allows these fine musicians the opportunity to come up with a front porch collection of original tunes, easy to listen to, with much to say and even more to ingest...a real gem of great blues. Stripped down and very basic, the CD features only William's harp, Jack's National steel body guitar, and vocals from both men...musicians of the finest order...simply stellar and worth getting by anyone who is schooled in the blues in any way..."
Hittin' the Note Magazine
"Authentic...Gutbucket blues, complete with harmonica wuffing and bottleneck guitar. 'Old School' and proud of it."
Music Row Magazine
"fine harp playing and nuanced vocals...with interesting licks that feel right, tonally and texturally. [Howse's] playing and singing interweave seamlessly with Jack Pearson's sympathetic guitar accompaniment...his slide work on National steel has a sweet, sometimes mournful quality that works well...a solid first release."
Blues Revue Magazine