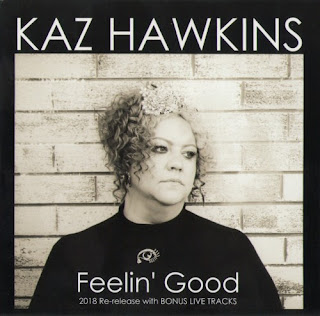 What’s the perfect antidote to the Monday (or, for that matter, any-day) blahs? Blues fans, when you’re bored at work, feeling sluggish, or overwhelmed by projects on the other hand, to whom might you turn? Belfast’s Kaz Hawkins Band, and their zesty third album, will have you Feelin’ Good in no time! With their high-energy take on 1950’s-style blues, soul, and rock and roll, this ensemble aims to lift the spirits of everyone who listens to it. That they do, with one part effervescence, one part sweet harmony, and one part dark-rum vocals from Kaz. On eight original songs and two covers (the title track and Willie Dixon’s “I Just Want to Make Love to You”), they prove themselves more loyal devotees of their genres than some US artists today.
The Kaz Hawkins Band has received several notable accolades for their accomplishments. For one, they were the first-ever winners of the Barry Middleton Memorial British Blues Award from Northern Ireland. Kaz and her posse also won the Pure M Award for the Best Female Act in Ireland. Furthermore, in 2015, Blues Matters Magazine took a writers’ poll, and their previous release Get Ready won the respondents’ award for Best Studio Album. On top of all that, their website reveals: “Kaz has worked tirelessly for different charities and is Arts Ambassador for EastSide Arts Belfast, in which she lectured students at Boston University on how she used music to survive trauma. Adding more strings to her bow, Kaz has just created [the] Blues Sisterhood UK organization, hoping to bring sisters together under one roof.”
With Kaz, as she performs on dynamo lead vocals, acoustic guitar, and keyboards, are Nick McConkey on lead and acoustic guitar; Peter Uhrin on drums, percussion, and backing vocals; Jan Uhrin on bass; Deanne Jones on backing vocals, and special guest David Jamison on percussion for the opening number.
Picking the best three songs on this CD is like picking three winning Powerball numbers out of four – incredibly difficult to do. Nevertheless, yours truly will happily give it her best shot.
Track 01: “Pray” – Sometimes people think that if they call upon the name of a higher power, they’ll escape a lower fate in the afterlife. Perhaps, but in the meantime, sins and misdeeds have their consequences: “You can fool all of these people with your black and selfish lies…You can play poker with your demons, and hide it from your eyes, but this place where you’ve been heading, girl – you ain’t getting no nice surprise.” The strongest section of this song is its nearly a cappella section, punctuated only by finger snaps and rhythmic thumping.
Track 02: “It Ain’t You” – Take a funky trip back to the 1970’s on track two, featuring a disco intro with great bass from Jan Uhrin. The narrator of this song is trying to tell her lover that he’s not the proverbial One: “For a moment, you look so fine. Just for a moment, you’ll be mine. Just for a moment, we lock arms, and baby, I’m inside, but no, it can’t be you.” Superb rock-and-roll electric guitar from Nick McConkey increases the voltage on this song to a startling level.
Track 09: “Soul Superstar” – This is the power ballad every one of us needs to hear when we’re feeling down, or like life has momentarily lost its purpose. The chorus says it all: “You’re a soul superstar, and you know who you are. You keep on, you keep on going. Yes, you’re a soul superstar, and you know who you are. You keep on, you keep on growing.” Spectacular harmony and energy that will propel anyone into the stratosphere are what lucky number nine is made of.
The Kaz Hawkins Band knows Feelin’ Good is what the blues is all about! (http://www.bluesblastmagazine.com)