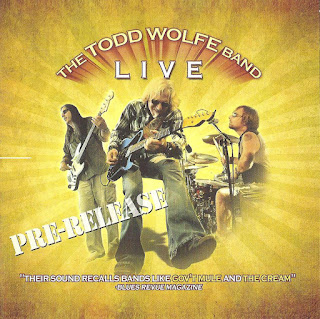 The Todd Wolfe Band, consisting of Wolfe on vocals and guitar, Suavek Zaniesienko on bass, and Roger Voss on drums, is heard here at a show performed at McCoole's Arts Place in Quakerstown, Pennsylvania. The CD is the complement to a DVD version that has eight more songs (four from the Quakerstown concert and four more from a German gig). Wolfe, a native of Forest Hills in Queens, New York, is a blues-rock journeyman who has played on his own and backed other artists including Sheryl Crow. The set here displays his influences in an overt way. The main one seems to be Jimi Hendrix, whose playing is particularly recalled on "Cold Black Night," as the rhythm section sets up a pattern and Wolfe solos extensively over it. Jimmy Page's work with Led Zeppelin is recalled on "Roll Over," while "Black Hearted Woman" sounds like something Cream could have played. And Wolfe is not shy about sounding like a guitar hero of the late '60s; in case you missed the point, he concludes the Hendrix-like "Change Will Come" by quoting both Cream's "Sunshine of Your Love" and Hendrix's "Voodoo Chile." As a singer, he resembles Kim Wilson of the Fabulous Thunderbirds, and his songs sometimes have the roadhouse blues sound of the Thunderbirds and Stevie Ray Vaughan. This is not, thus, innovative or particularly original music, but it is well-played blues-rock in an established tradition, and there is always an audience for that.