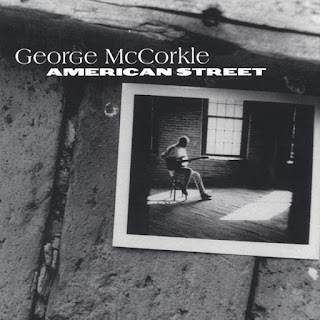 The term Southern Rock is synonymous with guitar master and songwriting giant George McCorkle. His landmark song "Fire on the Mountain" became an anthem for both rock and country fans alike, and was one of the first definitive songs to combine the best elements of both genres. That infusion of airtight visual imagery, married to haunting melodic musical form and structure is what George McCorkle is all about.
For a man who has sold out Madison Square Garden and played every major venue and festival around the world, it could be easy to rest on one's laurels. But that is not the case with McCorkle.
A humble and reticent man, McCorkle shuns the spotlight as a rule, venturing out to play select dates. In the recent years following the success of the Marshall Tucker Band, he has chosen to concentrate on songwriting.
The culmination of these efforts is American Street, McCorkle's new solo release on October Street Records. Never has his imagery been more vivid, or his musicality deeper. He says it reflects a musical journey, and represents where he thinks the Tucker Band might be, if they were together today. As the surviving founder member of the band, McCorkle is in a position to know.
The songs speak for themselves -vignettes of quirky characters, sheer pop ear candy, and steamy blues infused rock. "Fire On the Mountain" makes an appearance, in a breath-taking rendition at a slightly slower tempo, allowing the song to breathe. "The Journey Home" is another landmark southern rock anthem, which McCorkle wrote about childhood friend and band mate Toy Caldwell.
Son Justin is a guest guitarist on the disc. And it goes without saying that McCorkle's fiery signature guitar sound is ever present. New Orleans pop diva Theresa Andersson lends both her incredible vocal abilities and violin playing to the record, dueting with McCorkle on "Land of the Free".
On stage, George McCorkle was the smiling Tucker, of the legendary Marshall Tucker Band. A band he formed with Tommy & Toy Caldwell in l970. Today he is still smiling with a zen-like calm about him. Although it may seem as if he traded playing before 100,000 people for the intimate atmosphere of famous listening rooms, his decision has resulted in songwriting success for other well-known artists. MCA singer Gary Allan features "Cowboy Blues" on his current release, David Ball recorded "For You", and jazz-diva Benita Hill and Western roots artist Joni Harms all continue to come to McCorkle for more hits.
The influence of the original Marshall Tucker Band on today's music scene can be heard pouring from stages, jukeboxes, and radios all over the country One reason for the widespread influence is that the MTB never made musical distinctions between genres that most people believe to be incompatible. "When we quite judging what is country and what is jazz and what is rock and roll, then everything becomes a circle," says McCorkle. "Then you can play it all."
And play it all he does. Gone are the stacks of Marshall amps, but the power behind the strings is still there. All McCorkle has to do is plug into anything, and there is no doubt that the master is still in charge of the sound. It's just that he prefers the quiet of his deck or studio to the rigors of the road. You could say he's been there and done that. And survived it all - the good times and the bad.
George McCorkle is a survivor, a quiet and sensitive man with a great sense of humor, and a deep love for for life. "Heck", he says," I even have good friends from New York now! Evidence of the 12 million records he sold, are kept in the closet. He and wife Mary prefer an unpretentious lifestyle in a bucolic setting outside of Nashville, and travel frequently to their lake house in South Carolina. He admits to one vice - his love of golf, and plays with a near pro handicap.
Just when you think you've heard it all from George McCorkle, you've got another listen coming.