Greg Izor & The Box Kickers - I Was Wrong 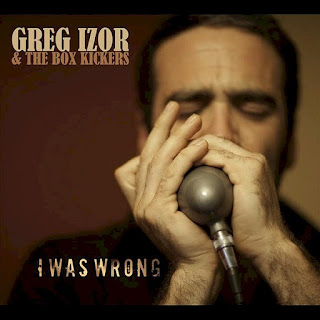 Greg Izor has quickly become one of the rising powerhouses in the world of blues harmonica. Effortlessly blending the sounds of South Louisiana, Chicago, and Texas he creates a deeply rooted traditional sound that is unique and fresh.
Greg grew up in Vermont, honing his chops with local bands. He moved to New Orleans in 2000, in order to study with the masters of blues, and immediately fell in with the cream of the crescent city’s blues scene. He came under the wing of one of today’s greatest harmonica players, Jumpin’ Johnny Sansone. Sansone mentored his young student, and taught him the importance of carving out an individual style. Izor strives to make traditional music fresh, by bringing a great deal of intensity and creativity to his playing, and by adding a variety of influences. He developed his fiery showmanship on Bourbon Street in his early twenties, where he was featured at the Funky Pirate Club five nights a week. Izor is also a member of the King Brisket Boys, a New Orleans all-star blues band that started out as the house band at Gatemouth Brown’s BBQ joint. During his time in Louisiana, Greg played with a number of legends including Clarence “Gatemouth” Brown, Eddie Bo, Jerry “Boogie” McCain, Henry Gray, Wolfman Washington, and Oliver “La La” Morgan. He also performed at the New Orleans Jazz and Heritage festival and was featured on a number of the city’s harmonica shows, a Jazz Fest favorite.
Moving to Austin in 2006, Izor immediately fell in with the cream of the city’s blues talent, playing with veterans like Pinetop Perkins, Gary Primich, Derek O’Brien, Denny Freeman, and Marcia Ball, as well as young upstarts like the Fabulous Thunderbirds’ Mike Keller, Johnny Moeller, and Nick Curran. He rapidly established his reputation for intense, high energy performances, stunning technique and musical prowess, playing at clubs like the Continental and Antone’s, as well as cutting his first record, I Was Wrong. Izor’s songwriting and playing shows the influence of the harmonica masters, as well as Louisiana blues, southern soul, swamp pop, early jazz, and R&B.
“I think it’s really important to keep the blues alive, and the best way to keep the tradition alive is to know the music of the masters, and add your own thing to it to keep it modern and stay creative within the genre.”