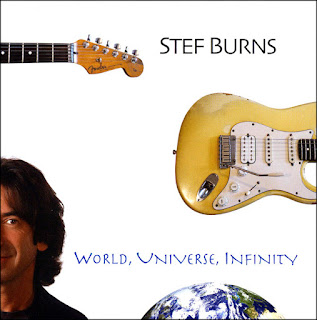 Stef Burns has released his 2008 solo album, World, Universe, Infinity, which features, in addition to a number of instrumental tracks that he in generally known for, his first lead vocal opportunities. Burns remarks about the half-instrumental, half-vocal project, " The track "Burns' Blues" is inspired by one of my favorites, Jeff Beck. It's blues with a twist. "Mepukori" is based on another song entitled "Spasimo" written by Mario Riso from the "Rezophonic" album in Italy. Lyle Workman and I rearranged, rewrote, and added a new middle section that is gorgeous. Then we got to trade guitar solos. It features Abe Laboriel Jr, and Jimmy Johnson. "On My Way Home" is a very feel good track with lots of atmosphere. "Isle Mystique" has a cool feel. "Shine" I cowrote with Fabio Valdemarin and might be the most emotional track on the album. He is such an incredible piano player. "Space Time" is a funky jazz/pop song with horns and killer solos, while "Little Wing" is a beautiful Hendrix song that I have always loved and we recorded live. The CD features Huey Lewis, Sean Hopper, Bill Champlin, Juan van Emmerloot, Walter Latupeirissa. Peppino D'Agostino, Jeff Campitelli, Marc Russo, John Seppala, John R Burr and Jeff Babko.