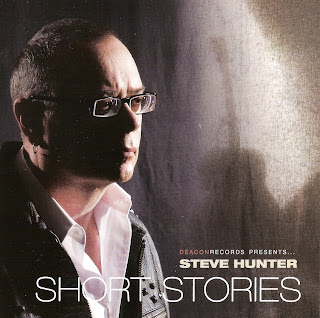 Steve Hunter has been contributing his expertise, style and tone to other people’s albums for over 40 years. Starting with Mitch Ryder in 1971 and moving on to record and or tour with Peter Gabriel, Lou Reed, Alice Cooper, Julian Lennon, Bette Midler and Tracy Chapman to name a few.
He has had a longstanding working relationship and friendship with legendary record producer Bob Ezrin since those early albums, which continues today. From unforgettable tracks such as ‘Solsbury Hill (Peter Gabriel), ‘Train Kept Rolling’ (Aerosmith) and ‘Intro to Sweet Jane’ (Lou Reed).
Dedicating his life to music despite dealing with the degenerative eye disease Pigmentary Glaucoma.
Steve has recorded four albums under his own name: ‘Swept Away’ ‘The Deacon’ ‘Short Stories’ and Hymns For Guitar’. The latter two can be currently found on most major online stores including iTunes and cdbaby.
Most recently Steve has featured heavily on the new Alice Cooper album ‘Welcome 2 My Nightmare’ a successor to the hugely successful ‘Welcome To My Nightmare’ released in 1975 and also completed a world tour with Alice during 2011.
He is now back at home working on his own new album, due for release later this year and has released a cover of Marvin Gaye's 'What's Going On' as a download single, available here on CDbaby and other digital sites.
Steve is now legally blind but the tone and musicality at the end of his fingers is stronger than ever.
‘Short Stories’ is a collection of instrumentals full of mood and color.
“I have always admired authors such as O. Henry and Edgar Allan Poe for their ability to tell an amazing tale in a very few words. I am also a big fan of the old Twilight Zone series for the same reason. With “Short Stories” I’ve tried to do something similar only with music. Most of the songs on the CD are 3 minutes or less in length but I wanted each one to tell its own little story. I also think of each piece as a “sound picture”, projecting an aural image as well as telling a story. I hope you enjoy my collection of “Short Stories”.