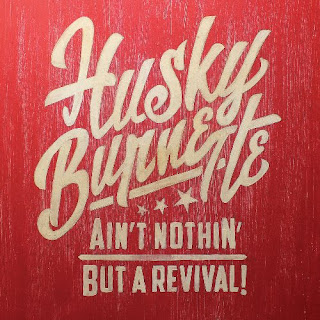 Pushing 300 bills, living and dying off of junk food and cigarettes, apt to have a damn seizure right there in front of you, Husky Burnette isn’t some singer/songwriter looking to entertain your town’s upper crust as they dine on chef-prepared meals in a local listening room. This is a one man wrecking crew shack shaking country blues force of nature that like a hurricane churning out in the gulf, once he gets wound up and momentum behind his back he may you put you through a wall or cause permanent brain damage, but that’s all part of the fun. This ain’t tinkly music for namby pambies, so best strap it up, synch it down, and hold on for dear life because Husky Burnette is barreling down on your ass with some deep blues mojo with a punk attitude, a truckload of tone, and a tendency to tell it like it is no matter the collateral damage or tender ears within the splash zone. Come hard, or get the hell out of the way.
No ladies and gentlemen we’re not talking about the sissy blues some local band plays to spell the Karaoke machine on Wednesday nights. We’re talking about the deep blues emanating from the North Mississippi Hill Country that gave rise to the Fat Possum boys like R.L. Burnside and Junior Kimbrough, and emerges from the muddy Mississippi ground like a Hoodoo apparition screaming its pain and damnation, and exorcising its demons through rattling chains and sinister growls.
Husky once was the lead guitar player for country songwriter Roger Alan Wade, and has shared a stage with the likes of Guy Clark, Emmylou Harris, and Leon Russell. But when he opens his mouth and rakes those guitar strings, all you hear is blues, and a punishing groove that puts you right in that place of full musical immersion.
husky-burnette-aint-nothin-but-a-revivalFor his latest record Ain’t Nothin’ But a Revival, Husky gets downright evil with it, but shows incredible breadth from the various version of the blues he covers. Possibly his most diverse record yet, Husky starts with the blues/ punk /metal sludgy grove and tone-heavy songs that have been his signature over the years, but then finds the loungy, smoky style of Tom Waits on “Pay By The Hour” and “Dog Me Down,” and a surprisingly artful, but still ragingly authentic a capella number called “Chicken Grease.” Then “Southbound / High Head” might be one of the hardest songs he’s recorded—more punk metal than blues—and Husky then strips it all down in the acoustic “Busted Flat.” If nothing else, the 10 Husky-penned songs of Ain’t Nothin’ But a Revival show the variety of knowledge and aptitude of skill Husky brings to the blues.
Helping Burnette bring the pain on the effort are quite a few notable contributors, including Col. JD Wilkes of Th’ Legendary Shack Shakers on harmonica, Andy Gibson (Hank3) who plays a little guitar here and there and recorded/engineered/produced the effort with Husky, and the record was mastered by country singer and songwriter Sweet GA Brown. O’Neal Dover on drums and Yattie Westfield on bass round out the rhythm section, and Bethany Kidd contributes vocals to the song she wrote for the record, “Dog Me Down.”
The only weirdness on the record came with a strange audio anomaly on the song “36 Degrees,” and again on the guitar on “Busted Flat,” where it sounds like they tried to use some digital version of gated reverb that was reaching for the right idea to make the track have a lonesome feel, but ended up just sort of distorting the song. Aside from that though, this record sounds excellent and is alive and compelling throughout from the variety of composition.
And something that always surprises you with Husky Burnette is the quality of songwriting, even though it shouldn’t by now. You think of him first as the growling, guitar shredding monster of a bluesman, but his lyrics are no afterthought; they tower right up there with Husky’s ability to lay down a groove as one of his lasting assets.
You might feel like you’re spitting out shotgun pellets and parts of your teeth after listening to this record, but that’s what happens when you get a face full of the real deal. Ain’t Nothin’ But a Revival ain’t nothin’ but a blues explosion, and it’s a record with enough variety and surprises to call it one of Husky’s best yet.