The Insomniacs - At Least I'm Not with You 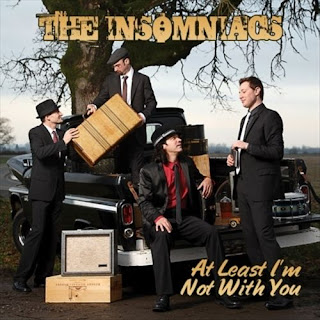 The Insomniacs came blazing out of the gate with a big, bold West Coast blues sound that was as much R&B as it was jump blues and swing. Portland, OR is better known for its alt rock scene, but the Insomniacs have been burning up local clubs since they launched their career in 2007. They won that year's Muddy Award for Best Contemporary Blues Act, despite their retro feel, and their first album, Left Coast Blues, was nominated for a Blues Music Award for Best Debut. They follow their impressive premiere with this platter, an even more remarkable set written and recorded in just two days. The band is tight and divides the program between obscure covers and their own high-octane originals that show them as an original force to be reckoned with. "Description Blues," the most traditional-sounding tune, is a tale of infidelity, and Vyasa Dodson's tortured vocal is full of passion and frustration. Alex Shakeri's Hammond B-3 tales an extended solo that's both jazzy and blue followed by Dodson's workout on guitar, full of bent notes, long sustains, and lightning-fast runs. "Maybe Sometime Later" is a Howlin' Wolf-style Chicago blues, a slow, swampy groove with a sly sexy lyric. "She Can Talk" tips its hat to the teenage rockers of the '50s, a portrait of a foxy chick laying waste to the male population with her dazzling chatter while Shakeri's piano drops some Jerry Lee Lewis into the mix. "20/20" is a wry take on the phrase "20/20 hindsight," a loose, shuffling lament about lost love and regret; Dodson's guitar and Shakeri's B-3 supply the fireworks. "Angry Surfer" is an unexpected side trip featuring Dodson's blend of twangy surf guitar licks and Chicago blues guitar and Shakeri's boogie-woogie piano. The rhythm section supplies a backbeat with a Latin feel to add to the complications. The instrumentals the Insomniacs lay down are just as compelling as their songs. "Root Beer Float" is a showcase for Dodson's guitar and Shakeri's piano; it's a jump blues played at a high-speed tempo. Dodson avoids blues cliches by playing mostly on the bass strings of the guitar, giving his lines a fat, chunky, rhythmic feel; Shakeri's right hand takes care of the high end while the rhythm section adds dynamics with unexpected stops and starts. The closer, "Insomniacs Boogie," is a horn-driven jump tune with Jeff Big Dad Turmes' sax and Dodson's guitar kicking the tune into overdrive as the band waves an energetic good bye. The group also shines on the covers: "Broke and Lonely," a Johnny Otis/Johnny "Guitar" Watson tune, receives a ragged, countrified makeover, Little Richard's "Directly from My Heart to You" gets a greasy, New Orleans R&B treatment, and Junior Wells' "Hoodoo Man Blues" is a smoky remake with guest harmonica player Mitch Kashmar contributing a soulful solo that would do Wells proud.