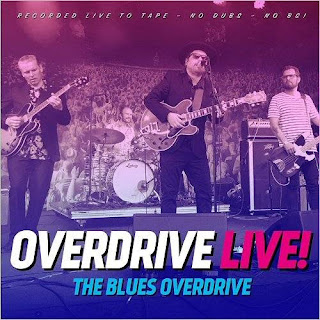 The cover of Overdrive Live! screams the album title in large capitalized letters, together with the promise that the album was “Recorded live to tape – No dubs – No BS!”. It also depicts a photograph of the band in concert, showing a drummer, bassist and two guitarists.  This, in conjunction with the band’s name, might lead one to expect a live recording featuring a series of long, loud and overwrought guitar solos all hung on the bones of a series of heavy rock songs calling themselves blues. Well, appearances can often be deceptive and everyone knows the dangers of making judgements based on first impressions. Overdrive Live! is the third album by the Danish band, The Blues Overdrive, recorded live at one of Denmark’s largest festivals, Smukfest, in 2016. It’s also a fine recording of a very impressive blues band in concert.Comprising Martin Olsen on vocals and rhythm guitar, Andreas Andersen on lead guitar, Brother Thomas Birck on bass and Louisian Bolter on drums, The Blues Overdrive formed in 2001 but did not release their first album in 2012.  Overdrive Live! includes four tracks from their debut album, two tracks from their 2015 sophomore effort, Clinch!, a new track (“Everybody Was Rocking”) and two covers. Olsen wrote all the songs except Bob Dylan’s “High Water (For Charley Patton)” and the psychedelic rock of The Chambers Brothers’ 1968 hit “You Got The Power To Turn Me On.” The latter song was often performed by Danish blues singer/guitarist/songwriter, Peter Thorup, to whose influence The Blues Overdrive also pay tribute on “Mr. 16 Tons (Blues For Thorup)”. Thorup died in 2007 but he was immensely influential in Denmark (and in the UK, where his version of Led Zeppelin’s “Whole Lotta Love” was used as the them tune to the Top of The Pops TV show throughout the 1970s and 1980s). Dylan’s “High Water” is re-imagined as a funky blues-rock workout, while “Death On The Highway”, which was originally performed on Clinch! as a mid-paced shuffle, now becomes an upbeat blues-rock groove that actually improves the song materially. The band tend to favor relatively short and punchy numbers, with only the threatening slow blues of “Ball & Chain” and the poppy soul-blues of “Cherry” extending past the five minute mark. This restraint and control serves the album well, with the focus very much on the song rather than the soloist.  This is not to denigrate Andersen at all, who delivers a series of memorably melodic solos (including a wry nod to “Baby Please Don’t Go” in his solo in “Mr. 16 Tons” and a bow to Jimmie Vaughan in “Three Time Lover” and Albert Collins in “I Was Wrong”). As a record of the band’s live prowess, Overdrive Live! is an impressive and highly enjoyable statement. Produced by The Blues Overdrive themselves and mastered by Bolter, Overdrive Live! captures the energy and vitality of a top-drawer live performance but combines it with a warm-yet-crystalline clarity many studio albums would envy. As an introduction to The Blues Overdrive, you couldn’t start at a better place than Overdrive Live!  Great stuff.