Arthur Neilson - Hell Of A Nerve 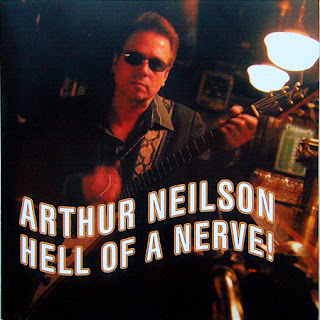 Arthur Neilson, born and raised in Queens New York, taught himself to play guitar on an electric Teisco Del Ray at age fifteen In 1979, Arthur caught the attention of the band Blue Angel with his rootsy and aggressive guitar playing. After joining Blue Angel, they recorded an album for Polydor, which garnered much critical acclaim. Cyndi Lauper was the lead singer of the band. In 1998, Shemekia Copeland found Arthur to be the guitar player that she was looking for to complete her touring band. Arthur has been performing with her across the globe and can be heard on her latest record, "Wicked".
Recently, Popa Chubby asked Arthur to be part of his New York City Blues record. Arthur contributed four of his songs, including the track "Fenderbender" which showcases his intense fretwork. Popa Chubby has also produced the three Arthur solo albums. Here is the brand new one : « Moan & cry »/ “Whether he's touring or recording, Arthur will always be found doing what he loves the most, which is playing his guitar.”
Popa Chubby