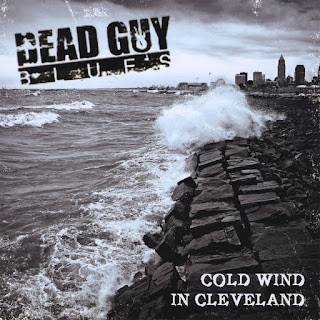 Rockin' Garage Blues with all original songs and scorchin' guitar from the Cuyahoga Delta. Dead Guy Blues plays blues from the Cuyahoga Delta. Cold hard steelyard blues. Their kind of blues was born in garages and grew up in broken bars with hard booze, hard love, hard men and women and hard rockin' music. Living as an illegal alien and partying like a rock star in Mexico City for 7 years guitarist/singer/songwriter Jeff Powers cut his teeth in various blues bands there. Though Jeff moved to Mexico City to perform and teach classical guitar he soon dropped out of the cozy and well paid classical world to live and play in the down and dirty clubs, jails, and places at the end of dirt roads (street parties).Barely eking out a living Jeff would cross the entire city with guitar and amp in hand by bus and subway to get to a gig or rehearsal but during his years there he wrote over 200 songs and developed his own standout style of blues guitar based around his virtuoso classical technique. It took a lot of gigs, tequila, beer, pulque and mota (a staple of the Mexican bluesman) to make the change but Jeff left Cleveland as a classical artist and returned a full fledged bluesman! He traded in his tux for a bad ass hat. Soon after returning to the Cuyahoga Delta Jeff put together Dead Guy Blues to showcase his guitar, vocal and songwriting skills. Even though Jeff loves traditional blues of all kinds his mission is to take it (the blues) somewhere else…laying down songs with twists and turns in the lyric, rhythm and chord changes, hence songs like: "Aztec Trot" (something you might encounter after drinking the Mexican water, "Roadkill", "Cold Wind in Cleveland", "I Miss My Ball and Chain" (a not so tender love song), "Bad Voodoo", "Beer and Whiskey, Coffee and Cigarettes", "Throw This Dog a Bone" and "Drunk as a Skunk". Their recordings show case only original songs but live they’ll tear it up on anything blues or anything that can be made into blues. From Link Ray’s classic “Rumble” to garage rock of the 60’s even an electric version of Stephen Still’s “Treetop Flyer” or a delta finger picked version of Hendrix’s classic “Voodoo Chile” (it will blow your mind), hell!they’ll turn a polka and into blues…nothing’s sacred! They even turn surf instrumentals into something they can crank on some roaring blues. Dead Guy Blues will play classic blues from Muddy Waters to SRV but they are going to put it through some changes!