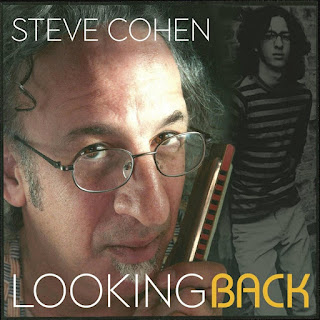 Blues based electric and acoustic music with jazz and rock influences. Expert harmonica playing and accompaniment by stellar sidemen. Strong vocal performances as well as instrumental tunes. LOOKING BACK is a retrospective compilation from Milwaukee based blues musician Steve Cohen. The performances were taken from 5 different projects dating back to 1985. All 13 songs were written by Steve Cohen.  Among the musical luminaries that are present on this recording are Junior Brantley (Stevie Ray Vaughan, Roomful of Blues, Fabulous Thunderbirds), Greg Koch (Fender clinician, Koch-Marshall trio), Jim Liban (Short Stuff), and Peter Roller (Yank Rachell). Bassists Dave Kasik (Bryan Lee) and Kurt Koenig, drummers Vodie Rhinehart and Bob Mueller, and conga player John Ricco are also present, as well as a cameo from Milwaukee gospel quartet The Masonic Wonders.Several songs are from recordings by the perennial Milwaukee blues band Leroy Airmaster, in which singer/guitarist Bill Stone is prominently featured.
Steve Cohen does all of the front line singing, most of the harmonica playing, and also plays guitar on several songs. Steve Cohen has been an important part of the Milwaukee area blues scene for 5 decades. He has been a part of numerous ensembles, playing prolifically since he started performing while still in high school, in 1969. He has released 9 projects of his own and played as a sideman on dozens more. He is the author of 5 harmonica instruction books published by Hal Leonard, and has played the harmonica parts for over a dozen other Hal Leonard harmonica play-along instruction books including Little Walter, Bob Dylan and most recently Muddy Waters. As an educator, he taught blues history at UW Milwaukee for 5 years, and was associated with the Wisconsin Conservatory of Music for 3 years. He has had many private students. He has worked as a booking agent under the auspices of the Blues Central Booking Agency which he created in the 1980’s, and has booked thousands of dates for hundreds of non-commercial bands and musicians, both local and national. He has also worked as a DJ at WMSE, and has written music reviews for the Milwaukee Journal Sentinal and the Shepard Express. Both as a harmonica player and with his band, Steve has won a dozen WAMI (Wisconsin Area Music Industry) Awards, and he served on the WAMI board of directors for two different 3 year stretches.