Vince Converse - One Step Ahead 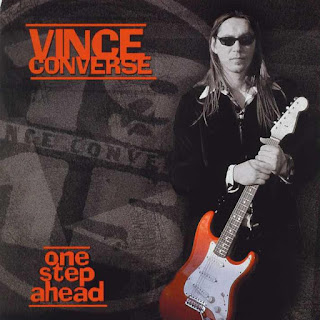 By now there are several twenty-something hotshots on the scene who pledge allegiance to the Blues-Rock Trinity of Albert King, Jimi Hendrix, and Stevie Ray Vaughan. These are the fleet-fingered chopsmeisters who love to bend notes with a vengeance while not shying away from wah wah and/or distortion pedals. The most ferocious of these is Houston native Vince Converse, who elicits more than a few double takes on his scorching, toe-curling debut One Step Ahead (Mystic Music & Entertainment 54332-2; 56:25). Produced by the legendary Eddie Kramer (who helped Hendrix and Led Zeppelin achieve their patented sounds 30 years ago), this high-intensity blues-drenched rock offering rates right up there with the best of what Jonny Lang and Kenny Wayne Shepherd are currently putting down. Converse owes a huge debt to Hendrix, which is evident on the anthemic “Equality” and the driving instrumental “SNAFU.” His SRV-by-way-of-Albert influence comes across loud and clear on “Someone Else Instead.” Any questions about Converse’s ability to grasp the blues are quickly put to rest on a passionate reading of B.B. King’s ultra-slow “Recession Blues” and a haunting dobro slide rendition of Willie Dixon’s “I Ain’t Superstitious.” The presence of the kicking Uptown Horns on a few tracks adds an earthy touch, particularly on Edgar Winter’s “Give It Everything You Got” and the funky title track. An auspicious debut from the latest chops monster on the block, and with a talent this big, Converse is bound to stay One Step Ahead of the competition.