Boney Fields And The Bone's Project - We Play The Blues 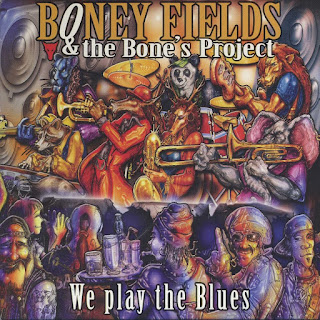 “Real music by real musicians” as Prince used to say. Just like Prince, the trumpet player Boney Fields is part of this generation of African-American musicians born to tame the stage.
So it is no coincidence that his playing partners are named Lucky Peterson, Luther Allison, James Cotton, Buddy Guy, Liz Mc Comb, as well as George Clinton, Maceo Parker, Fred Wesley or Bootsy Collins.
Boney Fields faithfully merges Funk and Blues, the two sides of the same Great Black Music, and he does so with the skills acquired during a career spent playing on stages all over the world.
When this child of a Chicago-based large family started his career, he realized that he could have turned bad. But growing up both to ghetto songs and Gospel songs praised by his parents, Boney Fields chose a unique voice, his own, that he enhanced with the practice of an instrument, the trumpet. The two-fold talent of this singer/trumpet player propelled him from one session to the next alongside those legends. He accompanies them in studio sessions or on stage and additionally composes – during his “spare” time- complex arrangements for brass sections like those of Tower of Power or Earth Wind and Fire.
"Nothing beats the pleasure that you get from being in front of a crowd surrounded by your band, making music together."
- Boney Fields -