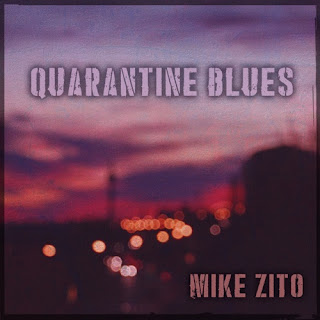 One of the many things to appreciate about singer/guitarist/producer Mike Zito is his meticulous preparation. Nothing ever feels under thought, which is what allows him to excel in a very tough industry. So when coronavirus shut down the world, including Zito’s European tour, he quickly pivoted to a plan B, which is Quarantine Blues, a rocking album made during Zito and his band’s quarantine after returning home (the album is available for free via SoundCloud, but Zito is accepting donations to support the too-many artists losing money because of the pandemic). The quick-fire nature of the album results in a different Zito energy that rocks with an uncharacteristic, and straight-up fun, abandon.For instance, the album has a hard rock distinct vein running through it. Which isn’t to say this is Zito’s metal masterpiece, but rather that he explores less blues-oriented songs and performances, with an emphasis on speed and intensity. Having said that, one of the album’s best tracks, “Don’t Touch Me,” features hard rock stalwart Tracii Guns, of L.A. Guns. Guns and Zito trade squealing riffs over a chugging groove, Zito’s bass voice keeping the anthemic track comfortably between hair metal and grunge. Guns’ playing gives the track an 80s flair, which isn’t a knock. The 80s had some killer guitar and it’s great hearing it updated for our times. It’s also nice to hear Guns featured, as he’s a truly underrated guitarist.
“Dark Raven” is another metallic tune, living up to its title. The song sounds fresh and contemporary but also has some serious Led Zeppelin influences, from the trippy John Bonham-esque drum beat to the guitar sirens that take you back to “Dazed and Confused.” The guitar is harmonized, giving the song a creepy air, like Zito has somehow hypnotized an army of guitar lines. And here too, his vocals are low and grungy. Yet, there’s still a blues rock underpinning to it all.
There’s also more traditional Zito songwriting. The title track is a pounding blues with some wild slide guitar. Zito’s vocal is more fire-and-brimstone preacher than singing, which is perfect for the tune. “What It Used to Be” is the closing acoustic number, something between folk, country, rock, and even flamenco. But lyrically, it’s pure Zito, as he tries to make sense of the pandemic by thinking about these kinds of events in a larger historical context. While the theme might feel academic, the vocal performance is all heart.
The thing that grabs you about Quarantine Blues is its immediacy. It doesn’t feel unfinished, but it’s not particularly polished. It has a wonderful live feeling. Also, a nice side effect of the recording process, where Zito layed down demos and sent them out to his band so they could add their parts separately, is that Zito’s guitar work is the backbone of every song. You can hear the song’s origins in his playing. If you stripped everyone else off of the tracks, keeping just Zito’s voice and guitar, you’d still have a very strong sense of the songs. Free albums like this are often seen as disposable but Quarantine Blues, while perhaps slightly atypical of Zito, is a strong work showing a different side of him. I hope when this is all over he takes these songs on the road. Quarantine Blues is great company and worth paying for.