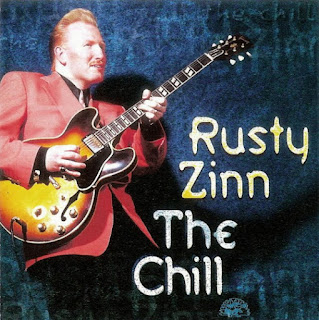 Rusty’s third CD, and his Alligator debut, The Chill, confirms his maturation as a blues stylist of grit, honesty, authority and facility.  Given his own resume and his new label, it’s no surprise that his immersion in 1950s Chicago blues has never been more obvious. Placing his own stamp on songs by Chicagoans Tucker, Arbee Stidham and John Brim (along with a ‘50s rocker by Johnny “Guitar” Watson) and putting a different Magic Sam groove to “Just Like A Fish” than Sam did is just part of Rusty’s bag of tricks.  Like Magic Sam, Rusty commands and reveres the tradition but can’t help updating it just by adding his own bad self to the mix.  The Chill includes five songs composed all or in part by Rusty, plus contributions from Rick Estrin and Ronnie James Weber, a bassist who’s worked with both Rusty and Rick.  Add in the solid contributions of two of Rusty’s road band, bassist Randy Bermudes and guitarist/pianist Bob Welsh (check out Bob’s tasty piano solos on “I Played The Game” and “She’s Got Style”), plus a cameo on slide guitar by Elvin Bishop on “Moonlight Blues,” and an engineer in Jerry Hall who’s The Man for capturing the vintage tube-era studio vibe of the music upon which Rusty’s is based, and it’s a powerful package.
Some people seem to be born out of their times, and maybe Rusty was born a bit after his; so the closest he’ll come in this life to rubbing elbows with too many of his closest musical kindred spirits is via his own interpretations of their classic blues sounds and styles.  But that timing bodes well for the future of the blues, when it receives such respect from a young man of as much talent, dedication and freshness of outlook as Rusty.  Come to think of it, it bodes exhilaratingly well for us listeners too!