Muddy What? - Blues For You (Live) 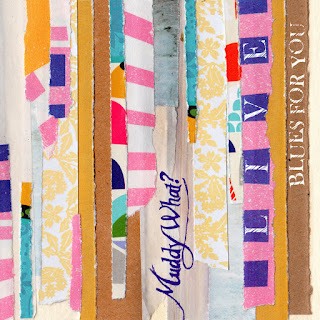 In June 2020, the new blues trio released their third album, finally fulfilling their wish. The right title: "Blues For You".
The album is a collection of ten songs, all played live and on stage in front of cheering audiences. And the band is really accelerating! Michi Lang on drums, Fabian Spang on vocals, guitar and electric Dobro and Ina Spang on lead guitar and mandolin heat up the audience.
The first song is a funky version of "If Trouble Was Money". And with wah-wah sound, dynamic beats and an exuberant improvisation section it is clear from the start: The band moves freely in their music, is detached from conventional and one-dimensional expectations of the blues. And so creates her very own "New Blues". The soulful reinterpretation of Dylan's song "Day Of The Locusts" as a touching ballad or the earthy original composition "Blue Trailer Blues" find the trademark sound, the MUDDY WHAT? among many other peculiarities.
The title song "Blues For You" shows how much the three musicians have grown together with a feeling for the blues. A melancholic, long lament with energetic and powerful vocals, with triplets that bring you into a trance and with soulful, snotty solos by the lead guitarist. With seemingly never-ending intensity, the song increases until eventually everything finally gives in to the feeling of the mighty blues. MUDDY WHAT? but then immediately with her pushing version of Jimi Hendrix's "If Six Was Nine". With pulsating electric guitar sounds, vehement vocals and hidden hip-hop beats, the inner eye sees the audience dancing ecstatically.
You can clearly hear, not least from the encore (a percussive oriental-style composition with the title "Mandorient" with mandolin and dobro), that the three young musicians do not fit into the "usual blues scheme", but do what they want to do they like. And only rely on feeling and feeling for each other. And how well that ultimately arrives in front of the stage can even be heard thanks to the live recording on this album.
“Blues For You” captured all of this in one flow: the uninterrupted dynamism and the stimulating tension between musicians and audience during a live concert.