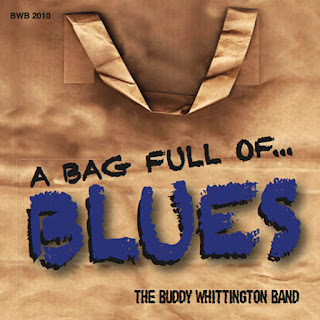 It all started in 2000, John Mayall’s Bluesbreakers together with Peter Green’s Splinter Group began a series of tours across the UK, America and Europe. Mayall has described Buddy as “possibly the greatest Bluesbreaker of them all”. Hailing from Fort Worth Texas, Buddy spent fifteen years playing alongside Mayall and some of the biggest names in Blues. His performances and song writing skills didn’t go unnoticed and he eventually released his solo album.At the same time, Splinter Group’s Roger Cotton and Pete Stroud spent many years working alongside Peter Green, up until Green’s departure. In 2008 Mayall disbanded the Bluesbreakers line-up, releasing Buddy to further his solo career and...“THE BUDDY WHITTINGTON BAND” was born.
This album was recorded live in the studio over two days at the end of the band’s May and November UK tours. Many of the songs included are by popular demand from our live repertoire, along with some new Blues... What initially started off as a record for us is now ‘A Bag Full Of Blues’ for you…