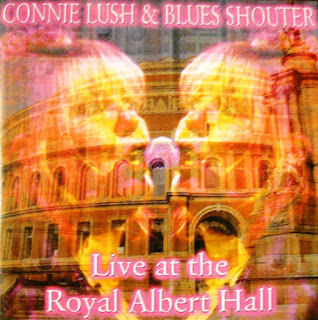 Connie Lush is a Blues singer from the UK.
Connie has been recognised as one of the finest Blues singers in the Uk today. The winner of “Best Female Vocalist Uk” no less than five times has earned Connie her place in the Gallery of Greats, alongside Alexis Corner and Eric Clapton to name just two. Her incredible stage presence and powerful vocal have also been recognized overseas as she was twice voted “European Blues Vocalist of the year” by the “Blues Trophies Awards” Pride of place is her award from the people of Liverpool for “Performing Arts”….and is still being nominated.
Connie grew up in Liverpool and was singing in her church and school choirs from the age of 5 yrs. Singing was never a career option, nor did Connie wish to until she met and married Bass Player Terry Harris who persuaded Connie to step on stage. Since that first night, Connie decided she never wanted to leave. Together they have shared that stage since. Connie burst onto the blues scene making her debut at the “Great British R&B Festival at Colne and never looked back.
Performing in over 30 countries, Connie has wowed audiences in Europe and from Moscow to LA. Some of the more memorable occasions included: In New York at the famous “Bitter End” Recording at “Cotton Row” Studios Memphis, with the great Teenie Hodges known for his work with Al Green, whom Connie later met at his church. And of course singing at BB Kings Club, Beale Street, not to mention singing on Hollywood Boulevard…….Then there was Glastonbury. But most of all for Connie has to be touring UK with the late, great BB king, culminating in a show at the world famous Royal Albert Hall London. Connie herself said “Nervous? I was both nervous and ecstatic at the same time! Not only was I on stage at the Albert Hall, but BB King was listening backstage!” Connie is also known as a songwriter, DJ and unforgettable performer. Connie continues her love affair with audiences everywhere, bringing her enormous gusto for life and music wherever she goes! Blues is her business and business is good! As BB King said “That woman makes my heart sing”/