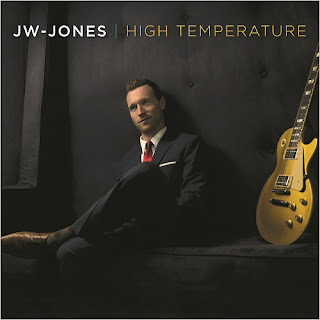 JW-Jones’ High Temperature, produced by Colin Linden, is the follow up to the JUNO Award nominated Belmont Boulevard, which was nominated for a Maple Blues Award, held the #1 position on roots radio stations across Canada for 13 weeks, and catapulted him to the Billboard Top 10 Blues charts in the USA.  With every release, Jones looks to explore new musical relationships. “I’ve been a fan of Colin’s for as long as I have been recording, and to finally get the chance to work with him on my ninth studio project was really special. His spirit and energy in the studio brought out inspired performances from everyone in the room, and the results are better than I could have imagined!”.  “JW-Jones is ready to take his place among the greater blues-based musicians of the 21st century, and I’m honoured to work on his new record” says Colin Linden. Linden (an 8-time JUNO and GRAMMY winner), is the musical director for the hit TV series ‘Nashville’ and has produced over 100 projects from Bruce Cockburn to Colin James.  High Temperature features the touring band Laura Greenberg and Mathieu Lapensee, as well as an all-star cast of session musicians; bassist Dominic Davis (Jack White, Tom Jones, Beck), keyboard player Kevin McKendree (Brian Setzer, Delbert McClinton), and drummer Bryan Owings (Emmylou Harris, Robert Plant). Liam Russell sings harmonies on several tracks, and JW welcomes his first recorded duet with hit-songwriter Jaida Dreyer on her song How Many Hearts (co-written with Colin Linden). The release features original songs penned with the incredible Ottawa-based songwriter, Dick Cooper (Cooper Brothers), including the deeply personal “Who I Am”, which Jones uses as a vehicle to open-up even more than on Belmont Boulevard’s “Cocaine Boy”.  In early 2016, JW-Jones was requested directly from George Thorogood & The Destroyers’ management to open several Canadian tour dates, and he toured the UK for the first time, creating a buzz that resulted in glowing endorsements from members of the band Vintage Trouble, and Joe Bonamassa’s UK publicist, Peter Noble. In 2015/2016, JW played over 100 high-energy shows, including being invited five times to perform alongside Buddy Guy, and two with Woodstock legends, Canned Heat. Jones has now toured in twenty-three countries and four continents and Jones has support from blues royalty; Jimmie Vaughan, Robert Cray, and the late Johnny Winter. 2017 looks promising for this rising star!  “JW-Jones is a breath of fresh air in this era of so much musical-fluff. Acclaimed Nashville producer Colin Linden takes Jones into new territory with warm, analog-driven tones, and a wide-range of material. His evolution as a musician and vocalist shine through on this record like never before. Real songs, real playing by real people, and JW is the real deal.” – Chuck Leavell (The Rolling Stones)
High Temperature is Jones’ 9th studio CD release and drops on Friday, October 28, 2016. It will be available on iTunes, Amazon, and finer record stores everywhere.