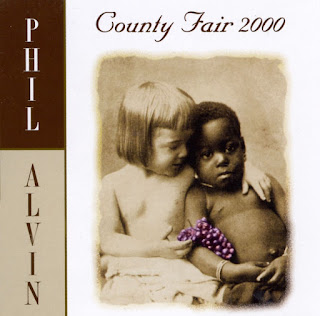 Phil Alvin's second solo date, County Fair 2000 continues his thorough exploration of Americana with references to tap dancing ("Low Down Rhythm"), Ellingtonia ("The Terror"), Delta blues ("That Thing"), New Orleans brass bands ("Danny Boy's Mourning Sunset"), rockabilly/country ("County Fair 2000"), automobiles ("Wreck Your V-8 Ford"), and the Jimmy Reed-styled "Oh, Doctor." Alvin has the good taste to employ an impressive list of guests including the Dirty Dozen Brass Band, Billy Boy Arnold, Cesar Rosas from Los Lobos, James Intveld, and members of the Blasters (without brother Dave Alvin.) County Fair 2000 leaves no doubt that Phil Alvin is a premier musicologist, preserving and staying true to what he loves.
Philip Joseph "Phil" Alvin (born March 6, 1953 in Downey, California) is an American singer and guitarist. He is known primarily as the frontman of the roots-rock band The Blasters.
Alvin grew up in Downey, California in a music-loving family where he and his younger brother Dave were exposed to blues, rockabilly, and country. Inspired and influenced by the music they grew up with, Phil and Dave formed the rock and roll band The Blasters in the late 1970s with fellow Downey residents Bill Bateman and John Bazz. The group released five albums between 1980 and 1985. While never achieving mass market success in commercial terms, their recordings and concerts drew critical respect and a cult following across the United States and Europe.
In 1986, after The Blasters had disbanded, Alvin released a solo album, Un "Sung" Stories and returned to graduate school to pursue a master's degree in mathematics and artificial intelligence.
In the late 1980s he reconvened The Blasters, albeit without Dave Alvin (who chose instead to focus on a solo career). In 1994, he released a second solo album, County Fair 2000. In 2005, under Alvin's leadership, the revised configuration of The Blasters released a much anticipated studio album, 4-11-44, after more than a decade of touring.
On July 3, 2012 The Blasters returned with a new studio album, Fun On Saturday Night.