Stefan Berggren - Stranger In A Strangeland 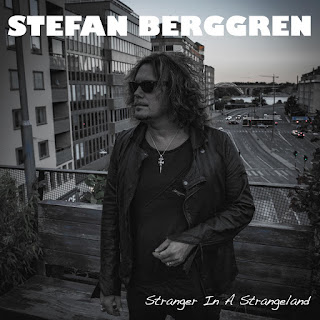 Stefan Berggren is one of Sweden's best-known musicians. In his over 30-year career, Stefan participated in many bands/projects such as Snakes In Paradise, M3, Company Of Snakes, Razorback and Berggren Kerslake Band and he, also, shared the stage with many legends like Whitesnake, Deep Purple and Brian May Band to name a few.
"Stranger In A Strangeland" is Stefan's debut solo album and shows the artist moving in the classic rock/hard rock sounds with a strong bluesier 'touch' that makes the final result a sensational purchase for every rock fan out there.
From the classic rock/blues opener track of "Sands Of Time", the listener gets in the mood of the new album. A slow and emotional song with Stefan's warm vocal lines in front row. "Ain't Got No Woman" sounds like a lost Whitesnake song from the early 80's while in "Long Gone Down The Road" will fill you up with a cool blues-based vibe!!! Really great stuff here!! "Stranger In A Strangeland" is a nice rocker, heavier, and in n"Life Goes On" we have a killer bluesier rock gem. More commercial with a feel-good vibe in it, this tune is one of this album's highlights. The acoustic, jazzy closer track "Bye Bye Baby" closes the new record with a moodier feeling.
"Stranger In A Strangeland" is a solid blues-rock album all the way. Based on 70's, early 80's rock scene Stefan Berggren is showing his emotional, more laid back side and along with his amazing voice he creates a record that will be appreciated by any fan of the soft rock, blues sound.

Stranger In A Strange Land