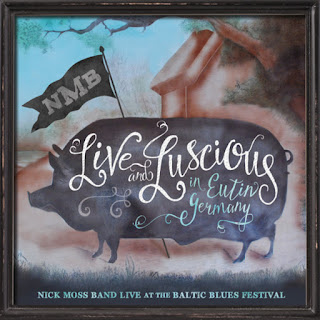 Nick Moss is no stranger to live albums.  His Live at Chan’s from 2006 and Live at Chan’s, Combo Platter No. 2 from 2009 still resonate with me as superb live works that highlight the energy that Nick and the players in his band exude.  Here we have Nick with Michael Ledbetter also on guitar and vocals, Patrick Seals on drums, Taylor Streiff on keys and Nick Fane on bass and backing vocals. This album comes from a tour well remembered by Facebook posts and You Tube videos.  The liner notes recall Michael Ledbetter  singing “Ave Maria” in full operatic voice in the Church of Roemond, something that just the recollection of can make the hairs on my arms stand up in fond memory.  When I saw the album release I was enthused to be able to enjoy a show by Nick and the boys from this tour. Recorded at the Internationales Bluesfest Eutin – Baltic Blues Festival on May 14, 2015, the CD features the band laying out 8 protracted cuts with jamming blues like few, if any others, can emulate.  From the extended guitar soloing on the opening cut “Breakdown” to the closing “Stand By,” we have an album that shows the power and precision of this band. “Breakdown” gets the ball rolling with an Allman Brothers-like jam as Nick sings over the dual guitars and splendid keyboard work before getting into a huge and stratospheric set of guitar solos/duos.  The song whirls as the keys infiltrate and the back line throbs in synch.  “Catch Me I’m Falling” give Michael the lead vocal and he shows us that his operatic training has given his voice a tone and timber that is unmatched.  He testifies superbly throughout.  The funky and rocking instrumental bridging midsection to the song is interesting and well done, but Ledbetter easily sells this one.  The funky guitar interplay is also marvelously done.  “Try to Treat you Right” picks up the pace a little and must get the folks dancing as Moss offers a coolly surreal and almost spooky vocal.  The piano adds some nice boogie woogie to the mix in a big solo before the guitars lay into it and things rocket off. Just over 12 minutes of slow blues is next with “The End,” the sets’ lone cover (from Jimmy Reed).  Things are thoughtful and a little ethereal until about five and a half minutes in when the guitar testifying rips at you with malevolent intensity.  This lasts almost three minutes until Moss returns to the vocals with perhaps both he and the listener emotionally spent.   The close of the song finishes things off sweetly! “Time Ain’t Free” rocks on next with a long intro before Moss sings.  The song builds in intensity and his guitar attempts to rip a hole in space and time with the rest of the band providing fuel to keep the mix hot.  “Shade Tree” brings things back down.  It opens to a sweet and mellow guitar and Ledbetter getting a little spiritual for us.  Four minutes later things begin to take off as Ledbetter sings and the band intensifies.  This leads into more huge dual guitar histrionics that jam off into the sunset, reminiscent of Allman and Betts or more recently Trucks and Hanes.  Moss and Ledbetter are masters of the guitar and they let it all hang out.  “I Dig” also features Ledbetter on vocals and quickly swings into some monster guitar.  It’s just a short guitar respite here before Michael returns with his husky vocals before some big guitar closes the show.  They encore with “Stand By,” a dark and dirty blues with Ledbetter singing as Moss tears the house down with his guitar, beautiful stuff. If you want a taste of the Nick Moss Band live this is something you need to get to bring them into your own home.  They have a new double CD from the studio that is getting released which I am sure will be something to listen to, but this CD gives us Nick, Michael and the band alive and at their peak.  This one is a no brainer- get it now!