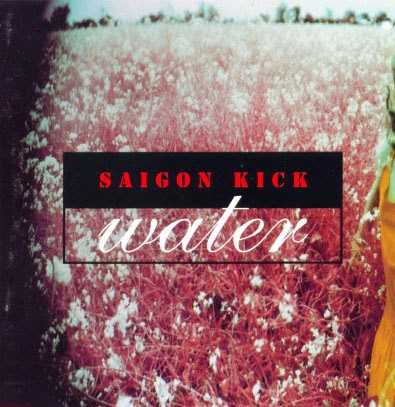 Musicians:
Jason Bieler - lead vocals and guitar;
Chris McLernon - bass;
Phil Varone - drums.
Additional Personnel:
Ronny Lahti - additional backing vocals on "I Love You" and "Fields of Rape";
Basil Rodriguez - string arrangements on "When You Were Mine";
Richard Drexler - piano on "When You Were Mine";
Basil Rodriguez - trumpet on "Sentimental Girl";
Keith Jacobs - RMM Community Choir director on "Water".

Water is another fine album by Saigon Kick that unfortunately undermines its own merits by trying to employ too many sounds at once. The same problem plagued Saigon Kick's first two releases, as the bandmembers hedged their bets while trying to embrace the dying metal scene as well as the embryonic alternative one at the same time. The band presents a dizzying array of stylistic shifts in the course of 14 songs, changing from alternative to punk, pop, metal, and ballads at the drop of a hat. The group most resembles Jane's Addiction for the majority of the album, although it offers a nifty cover of David Bowie's "Space Oddity" done with a real Mick Ronson flair. In a way, the album resembles a very scaled-down version of Smashing Pumpkins' Mellon Collie and the Infinite Sadness. However, Saigon Kick wasn't as adept at this approach and the record, while solid, is too schizophrenic to leave much of a lasting impression. Eclecticism has been a hallmark of good rock since Revolver, and in the right hands this approach can be a welcome relief from artists who rewrite one song for their whole careers. However, Saigon Kick overdoes it and can't quite pull it off. It's definitely better than the band's alleged hair metal roots would indicate, but Greatest Mrs.: The Best of Saigon Kick would be a better overall choice for most.