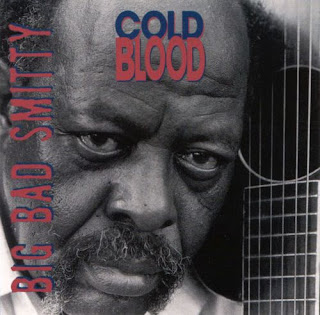 Big Bad Smitty, whose real name is John Henry Smith, is a Mississippi guitarist in the style of Howlin' Wolf and Muddy Waters. During his youth, Smitty played in the region of Greenville with Roosevelt "Booba" Barnes, a friend from school. The pair established a band and also played gigs in Arkansas. Smitty settled in Jackson, MS, and drove a truck for a living when he was in his twenties. The local blues scene afforded him the opportunity to play with musicians such as King Mose, Sam Myers, King Edward, and John Littlejohn. He recorded for Ace Records' Johnny Vincent, whose stable of talent included Huey "Piano" Smith and Frankie "Sea Cruise" Ford. Some of Smitty's recordings can be found on a reissue of Ace's Genuine Mississippi Blues, which was originally released in 1970. The guitarist relocated to St. Louis, where he hooked up with Big George Brock, Little Weaver & the Dynamite, and Bennie Smith. After heading home to Mississippi, he formed Big Bad Smitty & the Upsetters. JCE released his St. Louis on a High Hill album during the '80s. During the early '90s, Black Magic put out Mean Disposition in Europe. Aim Records released it in Australia, while Genes put it on the market in the U.S. An appearance at the Holland festival known as Blues Estafette followed, with Smitty touring Italy and Switzerland in 1992. The following year, Smitty again toured Italy and Switzerland, throwing in stops in Germany. He also played England's Burnley National Blues Festival, Belgium's Handzame Blues Festival, Arkansas' King Biscuit Blues Festival, and the Chicago Blues Festival. Also in 1993, the guitarist performed at Iowa's Mississippi Valley Blues Festival and Australia's East Coast Blues Festival. Upon returning home, the guitarist was waylaid by a stroke.