Syl Johnson - Bridge To A Legacy 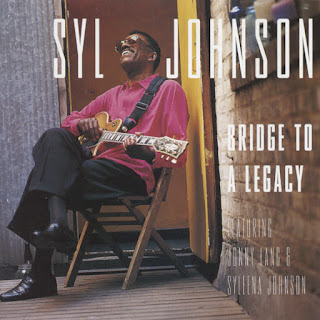 A popular attraction on the Chicago blues circuit, Syl Johnson has often found his recordings in the blues sections of CD stores. But truth be told, his solo albums have generally had a lot more to do with soul than the blues. Even though Antone's advised retailers to file Bridge to a Legacy under "blues," this is an R&B release more than anything. In fact, Johnson was quoted as saying, "I'm a soul man. I ain't no bluesman." You won't find any high-tech urban contemporary music on this good-to-excellent CD, which was ignored by Black radio. Sticking with the type of R&B he does best, Johnson sees to it that gritty cuts like "Midnight Woman," "Sexy Wayz" and "Who's Still In Love" aren't all that different from the songs he was recording for Hi 25 years earlier. Johnson was in his 60s when Legacy came out, and it was clear that his big voice had held up well over time. The Chicago-based singer not only sounds inspired on this album, he also sounds like someone who is still very much in his prime.