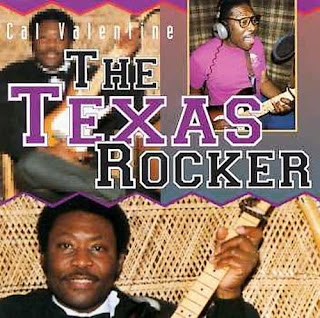 Recorded june and august 1994 at Double D studios in Fresno, Ca. USA
b. 28 May 1937, Dallas, Texas, USA, d. 1 January 1997.
In a musical career spanning four decades, Valentine went through a number of incarnations before his most recent apotheosis as a Texas bluesman. While at school he befriended Al Braggs, who later added ‘TNT’ to his name and had a successful singing career during the 60s. Together, they formed the Five Notes, who in 1955 recorded ‘Park Your Love’ for Chess Records. Later, as the Five Masks, they recorded ‘Polly Molly’ for the Jan label, and as the Five Stars, ‘Juanita’, for B.B. King’s short-lived Blues Boy Kingdom. Influenced by the Five Royales’ Lowman Pauling and local bluesmen Cal Green and Frankie Lee Sims, Valentine took up the guitar in 1958. After working in a showband with Braggs, Valentine joined his younger brother Robert to form the Valentines, who recorded three singles for King, including ‘Hey Ruby’ and ‘I Have Two Loves’. With the Texas Rockers, he recorded ‘Boogie Twist’ for Lyons, before moving to Oakland to work in the house band of the Showcase Club. In 1962 he spent three months in Jimmy McCracklin’s touring band, after which he formed the Right Kind with Ron Lewis, Bobby Reed and Frank Samuels. The band made a number of singles for Galaxy and backed visiting artists in the Oakland area. For much of the 70s and 80s, Valentine worked outside the music business in Dallas before returning to Oakland and forming another band. Although he performed an entertaining selection of blues and R&B perennials in his latter days, a weak voice and an unoriginal guitar style cannot raise Valentine beyond the limitations of his journeyman background.