Big Jack Johnson & The Oilers - All the Way Back 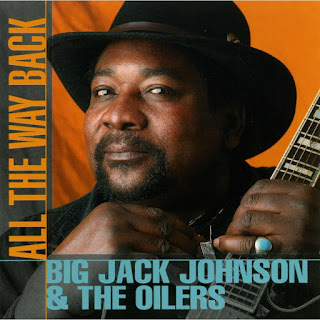 The Mississippi blues were changed forever when a whole generation of the state's bluesmen moved to Chicago in the '50s and transformed the Delta sound into something new, electric, urban and rocking. For those left behind, the challenge was whether to hang on to the old or embrace the new. Some blatantly imitated successful expatriate Mississippians such as Sonny Boy Williamson and Howlin' Wolf; others adopted the electric guitars and drums of Chicago but kept the old-fashioned drone-and-boogie of the Delta and Hill Country. No Mississippi musician better represents the full spectrum of the state's blues scene today than Big Jack Johnson. Johnson spearheads two groups -- a trio of Delta veterans called the Jelly Roll Kings as well as a young touring quartet called Big Jack Johnson & the Oilers -- and this latter group is featured on the new album, "All the Way Back." Most of the album is squarely in the Chicago sound created by such Mississippians as Muddy Waters and Willie Dixon, though Johnson gives the vocals a warmer Southern drawl and the guitar leads an ingratiating tunefulness. On the social commentary of "Crack Headed woman" and the open-hearted pleading of "miss magalee hall," however, Johnson reverts to the older, more exotic sounds of the delta. Johnson isn't as strikingly distinctive as such modern-day Mississippians as R.L. Burnside, T-Model Ford and Elmo Williams, but he's more accessible and technically proficient than any of them. As such, he offers the perfect halfway house for entering the most exciting blues scene in the world today.