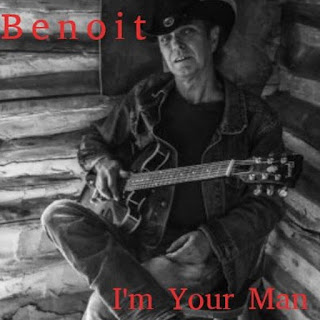 The blues is to be found wherever one goes; not the “state” of the blues, but blues music specifically. In every town regardless of size, there are guitarists playing the blues. Sometimes they make a living at it, but, more often, they could be but chose to keep their hand in while getting on with avoiding the state of the blues, or, to be more specific, making a living and raising a family. And it’s no surprise that among those are many whose abilities are such that they could have made a living, of sorts, as a player, singer and writer, but were not in a position to let life’s responsibilities slide while they played their slide.
London, Ontario, a medium sized city in Canada just may have more blues guitarists per capita than any other municipality above the 49th parallel, and Larry Benoit is recognized as one of the very best of them.
Benoit is one of those who took his responsibilities to his family seriously, and he accepted the role that life had handed him. Yet, he never stopped playing, but also never found the time to put his music down on an album until now.
Titled I’m Your Man, Benoit's CD differs from many of its type simply by presenting original material over the standard blues covers one can find on albums by too many others. All but two of the songs are his own, and all are equal to any other new blues you’re likely to hear this year.
Benoit's talents as a guitarist and singer are, naturally, featured throughout but as proof of the respect due him, his support musicians are all among the very best.
Doug Varty, Jim Corbett and Ed Pranskus are all members of the Jack Richardson London Music Hall of Fame, after a lifetime spent by each making a living from music alone. Others who came out to play with national reputations included Maple Blues Award honouree Chris Murphy; Randy Bachman’s drummer Dale Ann Brendon; nationally respected keys player Lance Anderson and drummer Ted Peacock, and on.
Benoit produced the album himself, with engineering help from Darren Morrison
(Bill Durst’s producer) and Kyle Ashbourne, along with Juno winning producer Dan Brodbeck looking after the mastering of the finished product.
This album is, in fact, not just another disc to be used to get more gigs in more bars. Instead, it is a fine piece of work, guaranteed to please all fans of fine blues music anywhere, and highly likely to make Larry Benoit’s name known well beyond the 519 Area Code, all things being equal. Watch for him on a stage in your town soon.