Josh Hyde - The Call of the Night 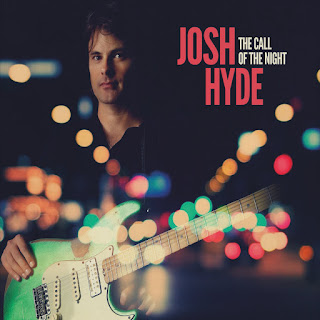 Josh Hyde is a native of Louisiana and offers up here 9 original tunes that are filled with  his Cajun and Zydeco influenced vocals and guitar.  His band included Joe V. McMahan on guitar (who also produced the CD), Ron Eoff on bass, Jamey Bell on drums, Bryan Owings on percussion and John Gross on keys.  Several guest artists including Sonny Landreth join in for a few songs and are noted below.
The title song “The Call of the Night” has an Allman Brothers Band sort of ring to it.  Slick Southern rock mixed with cajun and blues is what we have here.  “The Truth” follows with guitar and organ howling a bit along with the vocals in a New Orleans sort of manner.  “Close” is next, a country ballad of sorts where Hyde uses his vocal style to make an impassioned plea.  Buddy Flett is on guitar with the band for “Close.”  Sonny Landreth joins in on guitar for “Offshore,” a cut with a haunting and swampy sound that very much is in the Sonny Landreth style.  Landreth is also on the next tune, “It’s Not Too Late.” Tony Daigle also fills in on acoustic guitar and James Westfall is on keys.  The song builds from the acoustic guitar and vocals with the slide added and an overall increase in intensity and then Daigle takes us out on a soft note.
“Need A Lil More” is a “down in the bayou” sounding sort of tune with pensive guitar work and organ layered on the vocals to good effect.  Hyde follows with “Guitar in Hand,” a pensive and thoughtful piece with a long, pungent yet sultry guitar solo.  Next we have “Mississippi Bridge” where Flett accompanies on guitar and Laura Mayo does backing vocals.  A mid-tempo cut, it guilds a bit with nice guitar work and the keys behind the entire song for effect.  The album concludes with “I’ve Got This Song” where Westfall is back on keys in support.
The album is mostly sultry and low to mid tempo.  It spins an intricate web of swampy sounds that are cool and interesting.  The vocals are haunting and ethereal, also quite interesting.  It is a modern sort of bayou music that blends blues, Cajun, Zydeco and some Southern rock into an intricate sound.  It’s not mainstream stuff but it’s cool and a nice change of pace to listen to.  Certainly not straight ahead blues but it’s fun and, as I noted, very interesting and intriguing music.