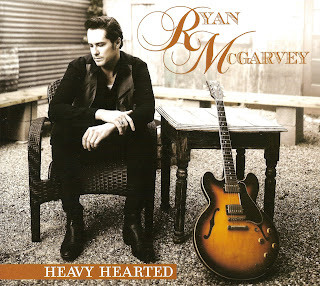 An album destined to go down in history as a classic example of modern day blues. This all new/original studio album that ranges from blistering guitar solos, heartfelt lyrics, to emotional vocals is a must have for any blues, rock or guitar lover!
This album has been a long time coming. Wanting to deliver a more straight ahead blues based album, Ryan McGarvey was joined in the studio by legendary bassist Carmine Rojas (David Bowie, Rod Stewart, Tina Turner, Joe Bonamassa, etc) drummer Logan Miles Nix (John 5), and ace keys player Brant Leeper (Coco Montoya, WC Clark, etc) to give what was to become a collection of "Heavy Hearted" all original songs. Still incorporating influences of modern rock, and more- This blues based album comes across almost as a front to finish representation of how the many shades, and styles of the blues has always influenced Ryan's music, and songwriting. Longtime favorites such as "Ain't Enough Whiskey", "Houston", and "Who Would've Thought" present themselves as strongly built songs that have long been requested by fans worldwide. Where as brand new songs such as "Right Side Of The Dirt", and "A Walk In The Rain" have already been proven to be new fan favorites! This album truly showcases the versatility of McGarvey's musicianship. From the guitar playing, to the matured vocals, to the overall songwriting. This is definitely an album that has been a long time coming, but been well worth the wait!