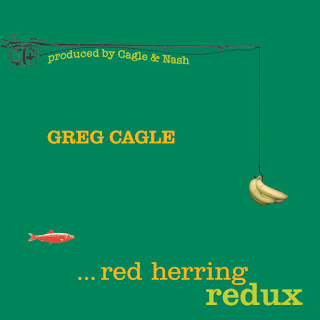 The 4th Cagle & Nash produced release - Red Herring Redux - is a Solo effort by Greg Cagle. Cagle & Nash take the songs on this project to a different place more on the blues, blues rock and alt rock vein.
This is the fourth production project for Charlotte, NC songwriter/producer duo Cagle & Nash Greg Cagle and Rick Nash both grew up in the town of Concord back when it was hip to listen to cats like James Brown and Otis Reading and Wilson Picket. They actually crossed paths for the first time at the young ages of 15 &16 respectively. Back then they called them “basement” bands. Doug & the Soul Review, the Tamrons, Then there were the serious bands like Sugarcreek where both Greg & Rick worked on a couple of different occasions. Sometime along the way Cagle lured Nash to UNC-Charlotte where Cagle went for Theater stuff and Nash was chasing that Music Composition dream
Cagle continued to build his catalog of original material and honing his composing and arranging skills while Nash went on to study studio recording and production under non other than Mark Williams, Engineer on projects of R.E.M, Don Dixon, James Brown fame while pursuing his day gig as Marketing Manager for a B2B manufacturer in the Charlotte area. Cagle and Nash still kept in touch on a close friendship level but were not afforded the opportunity to write and record together again until . . .
Fast-forward to Late December 2007 they got together again to to write and record. In 2009 the first Cagle & Nash titled CD - Soul Complete was released. Two years later this prolific duo is on their fourth release with Red Herring Redux and already have two other projects in the works.