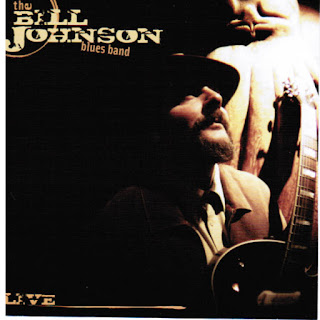 Bill Johnson is on the move with his 2nd cd release " The Bill Johnson Blues Band 'LIVE' ". His first cd "Why I Sing the Blues", is a collaboration between Bill and top US and Canadian poets.
Debuting to sold out shows in Vancouver and Victoria, Bill is beginning to be seen by a wider audience. When the first version of his band debuted, Victoria's Times-Colonist dubbed him "Victoria's Guitar Flame Thrower" after his performance at the International Jazz Festival. The title has stuck even though Johnson's style has matured. While his contemporaries have pursued FM rock's version of the blues, Bill's style is more that of yesteryear, citing his influences as Chuck Berry, Muddy Waters, T-Bone Walker, Eric Clapton, and BB King.
Previously Bill Johnson has been heard with Vancouver Island's Auntie Kate on her debut CD, and then again on a collaborative blues CD featuring Bill. In 1998 Bill teamed up with Grammy Award Winning Texas Bluesman Don Johnson for the CD "Donald Ray". Songs from that CD are currently play-listed on cable's Galaxy Networks blues channels, and on CBC radio, as well as some US stations.
Bill is very proud of his band. Featuring the multi-talented Gary Preston on harp, piano, and voice, Rick Erickson on acoustic/electric bass, and Paul Nixon on drums. The versatility of this band is amazing and sure to please blues fans everywhere.